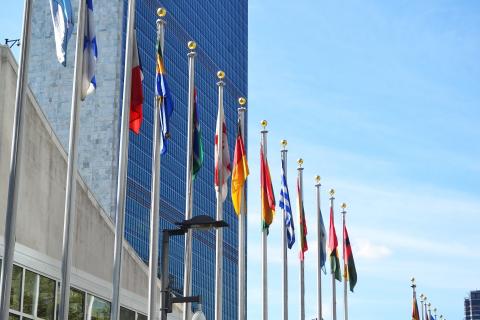 The following is a summary of latest reports and developments at the UN in response to the impacts of the novel coronavirus pandemic on global development goals. The following article was published in the May-June 2020 issue of NewsNotes.

In a webinar hosted by the United Nations on April 9, UN Chief Economist Elliot Harris described the social, economic, and financial impacts of COVID-19 as unprecedented. “The health crisis, the economic downturn, the financial upheaval – these could all reverse much of the progress made toward the Sustainable Development Goals over the past five years,” the IMF-trained economist said.

The webinar speakers described a vicious cycle of decreasing consumption and decreasing employment caused by lockdown and social distancing measures imposed by many national governments to slow the spread of the novel coronavirus. Together with growing health care costs, many countries are experiencing increases in poverty and inequalities as their economies sink into a deflationary spiral. [Watch a recording of the webinar on Facebook. Access the presentation here.]

The International Monetary Fund (IMF) projects global economic growth in 2020 to be negative three percent. According to the International Labor Organization (ILO), about 81 percent of the global workforce has been affected – that’s four out of five people in the workforce. The ILO calculates that the lost work hours are equivalent to 195 million full time jobs.

Trust in social institutions and social cohesion is also being tested, as some governments have enacted strict measures of control as part of their pandemic response. For example, in mid-March, President Rodrigo Duterte in the Philippines declared a month-long lockdown of metropolitan Manila, without much preparation or warning for its 12.8 million people. As COVID-19 cases have surged in the Southeast Asian country, the president has extended Manila’s lockdown to May 15.

Maryknoll Sister Marvie Misolas, originally from the Philippines and now serving as a Maryknoll representative at the UN in New York, heard reports of chaos on the streets of Manila on the first day of the lockdown. “Many vulnerable people working in the informal sector and as daily wage earners were forced to franticly search for affordable food because they knew their work and wages would shrink or end.” Meager government food provisions have been slow in coming. According to local reports, in one impoverished neighborhood in densely packed Quezon City, people went to the streets to protest because they were hungry and 23 people were arrested and detained.

UN High Commissioner for Human Rights Michelle Bachelet specifically named the Philippines, China, South Africa, Sri Lanka, and El Salvador as countries with alleged human rights violations in the guise of coronavirus restrictions. "Shooting, detaining, or abusing someone for breaking a curfew because they are desperately searching for food is clearly an unacceptable and unlawful response," Bachelet said in a speech in Geneva on April 27.

The fiscal impact of the pandemic, and its resulting social and political strains, are particularly worrisome for countries already heavily burdened by debt. In a 12-page policy brief released on April 17 and entitled “Debt and COVID-19: A Global Response in Solidarity,” the UN states that “rates of economic growth have not been as high as in the 2000s in most countries, partly due to the decline in commodity prices that reduced the capacity of many countries to pay. By January 2020, the debt of 44 percent of least developed and other low-income developing countries was already at high risk or in distress.”

“Initial estimates indicate that Africa may be in its first recession in the last 25 years, while Latin America and the Caribbean is facing the worst recession ever,” the UN brief goes on. “Similar decelerations are affecting many countries in the world, including in Asia and the Arab Region.”

Lacking the necessary resources to address the pandemic, such countries will only incur more debt. “As we strive to address the health emergency, debt relief must be an important part of the response to the associated development emergency,” the UN recommends.

Just as the pandemic has hit all countries, debt relief cannot focus solely on the poorest countries. “Debt relief should not be based on level of income but on vulnerability,” the UN recommends. “Middle-income countries, home to 75 percent of the world’s population and 62 percent of the world’s poor, are highly vulnerable to a debt crisis, lost market access and capital outflows.

The COVID-19 pandemic will have long term effects on the implementation of the UN’s 2030 Agenda for Sustainable Development, which lays out 17 goals for 2030 in order to build a more equitable, sustainable world. UN Secretary General António Guterres said in his COVID-19 response plan released on March 27 that the global community must “learn from this crisis and build back better.”