COVID-19 and a Global Ceasefire 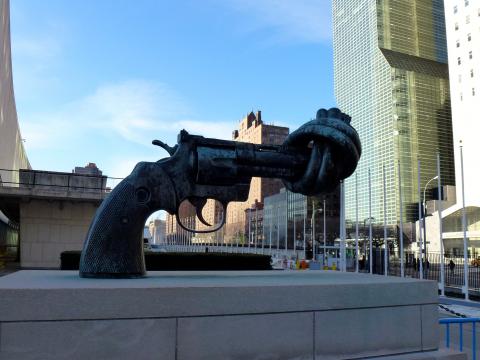 A growing number of world leaders are calling for a global ceasefire to allow war-torn countries to direct attention and resources toward addressing the impact of the novel coronavirus pandemic.The following article was published in the May-June 2020 issue of NewsNotes.

On March 23, United Nations Secretary General Antonio Guterres called for a global ceasefire in light of the novel coronavirus pandemic. His call was quickly echoed by Pope Francis and other leaders. Several warring parties have initiated ceasefires in response, with mixed success. The United States and Russia have urged ceasefires in certain conflicts, but the two superpowers have blocked the UN Security Council from demanding universal compliance with the Secretary General’s call.

In his initial call for a ceasefire, Guterres drew a stark contrast between war and the “intense solidarity and cooperation” needed to confront the pandemic. He continued, “[I]n war-ravaged countries, health systems have collapsed. Health professionals… have often been targeted. Refugees and others displaced by violent conflict are doubly vulnerable.”

Drawing a broad distinction between the nonviolent work of aid and diplomacy and the violence of war, Guterres said, “[A] global ceasefire is, of course, absolutely essential for an effective response to the crisis in areas of conflict but is also a value in itself. War doesn't make any sense when we have an epidemic, but war doesn't make any sense in any circumstances.”

Joining the call for a ceasefire in his March 29 Angelus address, Pope Francis emphasized the ways the pandemic has highlighted the folly of war. “May our joint fight against the pandemic bring everyone to recognize the great need to reinforce brotherly and sisterly bonds as members of a single human family,” the pope said.

Earlier the same day, Filipino Cardinal Luis Antonio Tagle, prefect of the Congregation for the Evangelization of Peoples, called for a “jubilee” – a forgiveness of debts for individuals and for impoverished countries – in light of the pandemic.

In a reflection published by Pax Christi International, Marie Dennis, former director of the Maryknoll Office for Global Concerns, drew a direct connection between this need for economic solidarity and the cost of war. Calling for a new understanding of global security rooted in “diplomacy, dialogue, reciprocity and a multilateral, collaborative approach to solving very real and critical global problems,” Dennis emphasized that authentic security rooted in nonviolence and solidarity demands that resources be allocated away from military spending and toward these larger goals of human security.

In the same vein, the Maryknoll Office for Global Concerns joined other organizations in a letter urging Congress not to allocate any additional funds to the Pentagon in 2020 as part of its response to the virus.

The response by armed actors to the call for a ceasefire has been encouraging but incomplete. Over 70 countries have joined the call. Eleven countries have seen ceasefires implemented, including by groups fighting in Cameroon, Colombia, the Philippines, Sudan, Syria, and Thailand.

In some warzones, parties expressed their intention to join the ceasefire, or implemented truces fleetingly, before fighting resumed. Notably, Yemen, Ukraine, Libya, and Myanmar have seen ceasefires announced and then broken. While such setbacks are disheartening, the expressions of openness to a ceasefire offer opportunities to apply pressure and continue to urge a halt to hostilities.

One significant barrier to implementing a global ceasefire has been resistance by the U.S. and Russia, both permanent members of the UN Security Council. While the two governments have pushed for ceasefires in Yemen, Libya, and elsewhere, and the Security Council has called for compliance in Afghanistan, Russian and U.S. officials have refused to support a more robust call for universal compliance from the Security Council, for fears it would interfere with their own military operations.

Church leaders have urged further compliance where possible. Cardinal Charles Bo, in war-torn Myanmar, declared, “Now is the time for a speedy, aggressive, respectful decision” just days before the outgoing UN human rights monitor there issued new allegations of war crimes  in a searing farewell statement, accusing the national army of “systematically violating the most fundamental principles of international humanitarian law and human rights” while the world is occupied with the COVID-19 pandemic.

Cardinal Bo urged armed actors to “lay down all weapons and [stop] acts of aggression.” The prelate offered to “mediate a new and timely dialogue among diverse parties.” But Guterres warned actors to move quickly. “We do not have much time. COVID-19 has shown how swiftly it can move across borders and devastate countries and bring life to a standstill.”

Faith in action: Sign a petition calling for a global ceasefire: https://bit.ly/PAceasefire