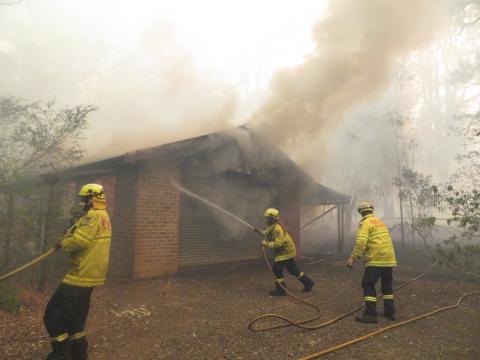 An unusually extreme weather phenomenon originating in the Indian Ocean has contributed to several climate-related natural disasters around the world in the past year. The following article was published in the March-April 2020 issue of NewsNotes.

Scientists in a recent BBC report explain that several climate-related disasters that have occurred in the past year are partially the consequence of a weather phenomenon called the Indian Ocean Dipole. These disasters include the intense bush fires in Australia, the floods in East Africa, and the locust swarms in East Africa. The extreme variation of the dipole that is happening this year is predicted to occur more frequently as a result of climate change.

The Indian Ocean Dipole refers to the disparity in temperature between the eastern and western sections of the Indian Ocean. The BBC report explained, “Temperatures in the eastern part of the ocean oscillate between warm and cold compared with the western part, cycling through phases referred to as ‘positive,’ ‘neutral’ and ‘negative.’”

Dr. Andrew Turner, a lecturer in monsoon systems at the University of Reading, United Kingdom explained in the BBC report that “When an Indian Ocean [positive] dipole event occurs, the rainfall tends to move with the warm waters, so you get more rainfall than normal over the East African countries.” A negative dipole phase would bring about the opposite conditions, causing warmer water and more rain in the east and cool and dry conditions in the west. A neutral phase would mean water temperatures were close to average throughout the Ocean.

The dipole’s positive phase this year was the strongest in six decades and resulted in higher-than-average rainfall and floods in East Africa and droughts in South East Asia and Australia. In Australia, this followed years of drought and steadily increasing high temperatures in the summer months. In December 2019 Australia experienced two days of the highest temperatures ever recorded on the continent.

The consequences for Australia included a record-breaking season of bush fires which burned 46 million acres, destroyed over 9,300 buildings, and killed 34 people and one billion animals as of early February.

Conversely, floods in East Africa were the result of an increase in rainfall of 300 percent above average in October and November 2019, according to the BBC. Close to three million people were affected by floods and landslides and over 300 died. Hundreds of thousands of houses were demolished and roads and bridges were washed away. The nations of East Africa will need billions of dollars to rehabilitate the areas affected. Several of these countries, such as Somalia and Ethiopia, are among the poorest and most vulnerable countries in the world.

In addition, starting in January swarms of desert locusts began moving southwest from northern Somalia, where they initially bred, into Ethiopia, Kenya, South Sudan, Uganda, and elsewhere. This was the worst locust outbreak in seventy years. In late January the United Nations said that $76 million was needed immediately to control the spread. With the long rains predicted to come in late March, increased vegetation could spur more breeding and it is possible that by June the number of locusts could increase by up to 500 times. The heavy rains of 2019 caused by the dipole created the perfect conditions for locusts to breed and produce unprecedented numbers of young locusts.

The severity of the weather outcomes last year and this year in various regions of the world has occasioned a fierce debate over the role of climate change. The government of Australia, for example, has resisted attributing these effects to climate change. However, scientists in Australia have long been warning that a hotter, drier climate will contribute to fires becoming more frequent and intense and many parts of Australia have been in drought conditions for years. Australia’s Bureau of Meteorology has stated that the country has warmed by over one degree Celsius (about 1.9 degrees Fahrenheit) since 1910 and most of this has taken place since 1950.

The BBC highlighted a 2014 study predicting that extreme climate and weather events caused by the dipole will become more common in the future as greenhouse gas emissions increase. These scientists project that the frequency of extreme positive dipole events will increase this century from one every 17.3 years to one every 6.3 years.