Colombia: What we have won by losing 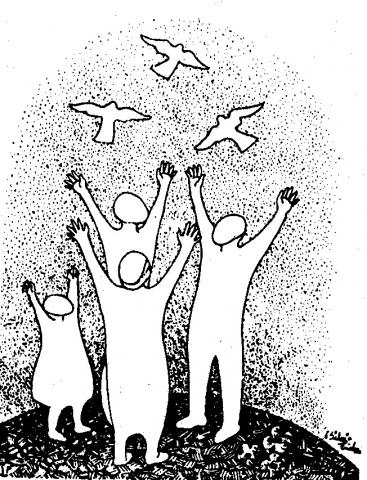 On October 2, voters in Colombia rejected by a very slim margin a peace deal that would have ended a 50-year civil war. Colombian Fr. Francisco de Roux, SJ, one of the participants in the Nonviolence and Just Peace conference held in Rome last April, wrote the following reflection immediately after the results of the vote were announced. This reflection was originally published by the Catholic Nonviolence Initiative, https://nonviolencejustpeace.net/ and reprinted in the November-December 2016 issue of NewsNotes.

We had issued an invitation to a vote of conscience, with full respect to those who think differently, to participate in the referendum, making it clear that we would accept and build from the result, whatever it was.

In good conscience, we explained the reasons that led us to fight for a Yes vote, convinced that it was best for the country and that our reasons would convince the majority, and we lost.

We struggled to overcome the spiritual crisis in the country that plunged us into our own destruction as human beings. We dreamt of taking a first step by approving the negotiations with the FARC, but we did not achieve this aim. Probably because we ourselves are part of the crisis, as the Colombians we are.

Thank God, Colombia is a democracy. And democracy, with its call for the people to make decisions, has the virtue of making us all face reality, whether we like it or not. As Machando’s couplet says: “The truth is what it is, and remains true though we may think the opposite.”

And yet this truth, the result of the referendum, may be the way that leads us to overcome the deepest of our problems – namely, ourselves – people who, as evidenced by this vote, exclude one another, are unable to grapple together on deep issues; and with the knowledge that our animosities and aggression – expressed in politics, in the media, in academic and faith-based debates, and within families – have lethal consequences among rural communities, and in the madness of war, where our young lose their lives, while other serious problems of the country remain unresolved.

Fortunately the statement of President Santos has given solace to all, because he has recognized the victory of “No” as a democratic outcome, maintained the bilateral ceasefire, called for a rethinking of the peace agreements incorporating those who won, and ordered government negotiators to resume dialogue with the FARC within the new political reality.

It is also important is to emphasize the constructive and conciliatory attitude of former President Uribe, who reiterated his will for peace, invited the FARC to continue in negotiations, and spelled out the legal, institutional, social and economic conditions that those who voted No consider essential for incorporating in the agreements.

This is the time to listen to one another, to understand and reconcile with those who, for social, political, institutional and ethical reasons, think differently; to accept our differences; to examine from all viewpoints, what is it that each person must change, so that all of us may live in dignity and in a peace that brings us well-being to every woman, man and child.

We will maintain and intensify the enthusiasm with which we give ourselves to the cause of peace, but we will do so by incorporating others, accepting their different understandings, listening to their arguments, fears and angers, and embodying the human being that we all are.

We believe that the central elements of the agreements of Havana and the method of the peace process remain valid. Six years of work were invested by people of extraordinary courage and the most serious dedication, men and women, civilian and military who are true human treasures of Colombia, and at their side, insurgents willing to put a stop to the war who were transformed in that very process. They deserved the admiration and support of the international community. But the result of the vote shows that the agreements have to be reformed to be politically and institutionally viable in Colombia today. And what matters in the end is peace, which requires moments of heroic generosity, so that we can overcome the barbarity of political violence in an effective way in a reconciled country.

I am confident that God is accompanying us on this path. Jesus’ claim that “the truth will set us free” is more valid today than ever. May the truth of the result of the referendum, with all its mix of human and political realism, purify and refine this process. May we today set out to become humanly greater.