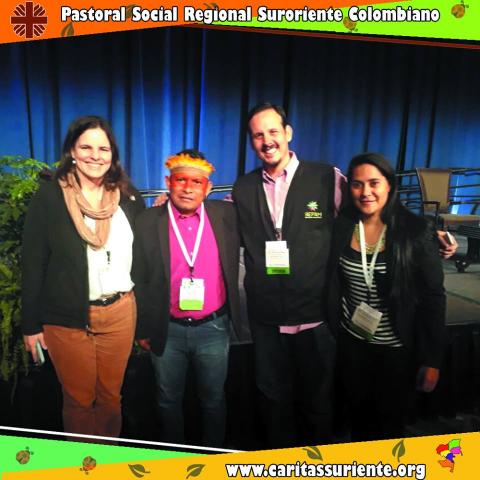 Dallana Contreras of Cáritas Colombia wrote the following article about her work with communities defending their land rights against national and international economic interests in the Amazon and Orinoco regions. It was was published in the March-April 2018 issue of NewsNotes.

Colombia is recognized as a country with great agricultural potential. The UN’s Food and Agriculture Organization names Colombia as one of the five most important countries to feed the world. Nevertheless, the national economic strategy has focused on mining, oil, gas, and large scale biofuels production rather than food production. This strategy does not take into account the rural populations that live in poverty and were most affected by Colombia’s decades of violent conflict.

The peace accord signed in 2016 presents an opportunity to improve living conditions for rural communities. Item One of the peace agreement is entitled “Toward a New Colombia Countryside: Comprehensive Rural Reform.” The goal is to give rural communities greater access to and use of land.

Cáritas Colombia values farmers’ relationships with land and nature, knowledge of local agricultural practices, and way of life. If the heritage of rural communities is not preserved, then not only is their existence at risk, but so is the existence of all of us.

To counter the current static rural development model, smallholder farmers have developed an alternative approach that reflects their vision of a nutrition and agricultural system. It includes protecting native seeds, pesticide-free food production, local economic development, and an exchange of both wisdom and flavors.

The Chaparrito community is located in the municipality of Puerto Concordia, in the central Colombian department of Meta. The National Development Plan names the municipality as a good prospect for agribusiness. The principle economic activity in Puerto Concordia is large-scale African palm oil plantations. Palm oil is used in all kinds of products, from biofuels to food additives to cosmetics.

The seemingly legal activities of a proposed plantation in Chaparrito is a threat to the rights of 25 smallholder subsistence farming families. The government could displace these families who have lived on and cultivated the land peacefully for the past 16 years. Many of them were internally displaced from other parts of Colombia during to the decades-long conflict. Now this struggle for land may rupture the social fabric they have worked so hard to build in Chaparrito.

If the land goes to the company, it would imply a preference for the neoliberal economic practice of measuring per capita productivity which benefits the agroindustrial palm oil companies. This goes against the dignity of the farmers and directly affects natural and collective resources like water and land.

The social pastoral team of Cáritas Colombia works to prevent the dispossession of land and to maintain the identity of peasant farmers in the rich and biodiverse Amazon and Orinoco regions. One of our strategies is to seek alternatives that promote integral human development. We stand firmly on the side of peasant farmers and indigenous communities. We have opened our senses, especially our ears, to listen to the cries for help and recognition. We walk with these communities in search of wisdom, solutions, and to defend their territorial rights.

In Chaparrito, first, we implemented an agroecological farming practice to create opportunities for farmers to reflect and learn, recognize the resources that already exist in their territory, and strengthen their values and their potential.
Second, we recognized that for this strategy to have an impact beyond their own farms, they needed to organize and strengthen the social fabric within the community.  Only then could the farmers be effective advocates to the government. They strengthened their individual and collective identities and developed agricultural methods grounded in sustainability, food sovereignty, and self-determination.

We have seen changes in the finca, or the land that is common territory. Here they create relationships with each other and with nature and improve the community’s economic and emotional health. Don Fernando, a farmer in the Chaparrito, said, “The garden forms a place of family meditation” that not only serves for consumption but also as a shared economic project where we grow produce to sell in the farmers market. This project has drawn the attention of local authorities and boosted support for other economic alternatives.

The farmers markets have great economic potential for smallholder family farmers. It is where they sell healthy and quality produce, without intermediaries in the supply chain, and at fair prices. This model fosters friendships, community life, and traditions that strengthen the social and organizational fabric of the community. Women, in particular, are the protagonists in this model and in cultivating a local identity. Through this accompaniment, we have learned that strong communities are formed when they make decisions together.

Photo: Dallana Contreras (right) at the Catholic Social Ministry Gathering 2018 in Washington, D.C. Photo shared on the Facebook page of Pastoral Social Regional Suroriente Colombiano on February 5, 2018. Ms. Contreras and her colleagues from COlombia participatiedas speakers at the Solidarity Forum in Nuestra Casa Común where the situation of the peasant communities of the Amazon and Orinoquia, as well as the dialogue between the indigenous and peasant peoples of Latin America and the United States, were discussed.