Climate disruption from D.C to Doha 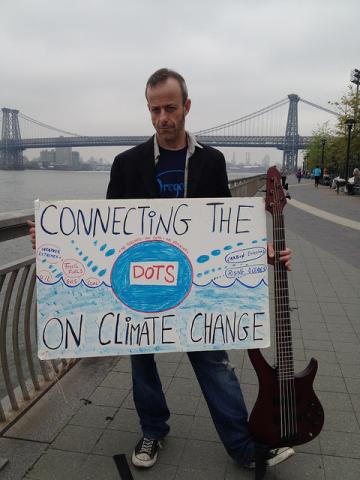 In the January 2013 issue of Sojourners, Bill McKibben writes about the bizarre weather year those of us in the United States experienced in 2012: In the U.S. alone, 2012 brought a March heat wave which led to fires in Colorado and New Mexico, and a "derecho" storm in June that followed the east coast heat wave, leaving five million people in the mid-Atlantic region without power. July 2012 was the hottest month ever recorded in the U.S.; the Midwest’s corn and soybean crops experienced a devastating drought. The grand finale for the year was the ferocious hurricane Sandy, which slammed the Caribbean, ripped through the Chesapeake Bay area, and tore up New Jersey and New York.

When considering climate disruption throughout the world, the picture is even starker. One of the latest examples is Typhoon Bopha, which left more than 1,000 people dead after sweeping through the southern part of the Philippines on December 4.

As Bopha barreled down, the 18th session of the Conference of the Parties (COP18) to the UN Framework Convention on Climate Change (UNFCCC) and the eighth session of the Conference of Parties serving as the Meeting of the Parties (CMP8) to the Kyoto Protocol was taking place at the Qatar National Convention Centre in Doha, Qatar, from November 26 to December 8. By the end of the meetings, the UNFCCC approved a second phase of the Kyoto Protocol entitled the Doha Climate Gateway. Despite agreeing to extend the Kyoto Protocol to 2020 and to commit to future actions to reduce greenhouse gas emissions, not much was accomplished.

At the 2011 convention in South Africa, the parties agreed to work on an instrument to legally bind all parties to action, not just rich nations (as under the 1997 Kyoto Protocol). The roadmap to create this instrument (replacing the Kyoto Protocol) is to be completed by 2015, but the 2012 Doha meeting did not even hint at what that agreement might look like.

Kieren Keke, foreign minister of Nauru and chairman of the Alliance of Small Island States, called the Doha Climate Gateway package "deeply deficient." He went on to say, "Much, much more is needed if we are to save this process from being simply a process for the sake of process, a process that simply provides for talk and no action, a process that locks in the death of our nations, our people, and our children." Keke fears Nauru, a Pacific island state, could become uninhabitable.

He told the delegates, "This is not where we wanted to be at the end of the meeting … It certainly isn’t where we need to be in order to prevent islands from going under and other unimaginable impacts. It has become abundantly clear that unless the work is supported by world leaders, particularly those representing the countries most responsible for the crisis, we will continue to fall short year after year."

Reuters reports that "Canada, Russia and Japan – where the protocol was signed 15 years ago – all abandoned the agreement. The United States never ratified it in the first place, and it excludes developing countries where emissions are growing most quickly."

On December 12, the Friends Committee on National Legislation held a House briefing on climate disruption and is behind a petition to motivate the Obama administration to host a Climate Summit in 2013. The administration has shown interest and is asking how much support and political will is behind the effort to host the summit. Even if the U.S. government has not signed the Kyoto Protocol, it is up to the people to rally support for the urgent systemic changes needed to face climate disruption. With political will, we can make a difference.

Contact your senators and representatives, as well as the Obama administration, expressing support for a 2013 Climate Summit. Also, consider participating with 350.org and Bill McKibben’s call for divestment from the fossil fuel industry.