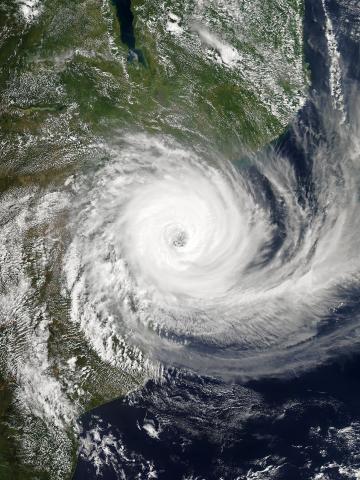 The United Nations is stepping up high-level events to urge member states to take action to address climate change. This article was published in the May-June 2019 issue of NewsNotes.

Since 195 countries signed the Paris climate agreement in 2015, whereby each nation committed itself to determine, plan, and regularly report on efforts to mitigate and adapt to climate change, UN Secretary-General António Guterres has concluded that insufficient action has occurred and that targets set for 2030 will not be reached. To generate a sense of urgency that will lead to action, the UN scheduled high-level conferences in Nairobi, Kenya, and at the General Assembly in New York, in March of this year.

Several national delegations have spoken of the unprecedented weather events taking place globally right now, most notably the small island developing states (SIDS) of the Pacific and Caribbean, which have been either inundated by king tides caused by sea level rise or devastated by Category 5 hurricanes. At the General Assembly High Level event in New York on March 28-29 this year, a number of delegations mentioned Cyclone Idai, regarded as one of the worst natural disasters in the history of southern Africa, which as of late March had left more than 1,000 people dead and thousands more missing in Mozambique, Zimbabwe, and Malawi.

Alexander van der Bellen, President of Austria, related that 2018 was the hottest year on record in Austria, heat that was causing glaciers to melt and desertification to spread to parts of Austria. So alarming are these phenomena that tens of thousands of youth marched to the president’s office in Vienna on March 15 to demand immediate action on climate change. Millions more in cities around the world joined the Youth Climate March where the alarm and anger of a younger generation at older people who have not, in their view, taken climate change seriously enough, was expressed repeatedly on signs and in speeches.

More high-level events dealing with climate change are scheduled for this year: in Bonn, Germany, in late June, and again at the United Nations in New York, in September, and finally at the Conference of Parties (COP25) in Santiago, Chile, in December. Chile’s Minister of Environment, Carolina Schmidt, while inviting members to the conference in Santiago, reminded all at the General Assembly high-level event in New York in March of three ambitions urgently needed now: Ambition in Implementation, Ambition for Action, and Ambition for Change. Many delegates reiterated her sentiments, stating that the time for rhetoric is over and now is the time for action.

Also at the General Assembly event in March, President Janos Ader of Hungary stated that he had met with six professors from the Massachusetts Institute of Technology in Boston to discuss the interface of climate change and water, and he quoted them as saying: “We are under-estimating the reality of climate change.” He pointed out that since the Rio climate summit in 1992, the world’s population has increased by 3.5 times but fossil fuel energy use has increased ten times. At this rate, we will not only be unable to stay below a 2 degree temperature rise but will go well beyond it. He quoted Abraham Lincoln: “You cannot escape the responsibility of tomorrow by evading it today.”

President Borut Pahor of Slovenia added that the window of opportunity is closing rapidly and that we must reach net zero carbon emissions by 2050. Thus, all countries must substantially raise their climate targets for 2030 and 2040.

Technological solutions to mitigate some climate change exist but, for mitigation and adaptation to succeed, several countries called for vastly increased financial assistance to developing countries, to the tune of $100 billion by the year 2020. The representative of France said that Europe will cooperate in this, but the Philippines’ delegate said pointedly that certain rich countries must accept their responsibility; otherwise climate change will take its inevitable course.

In June of 2017, the Trump Administration announced that it would withdraw from the agreement on November 5, 2020, just days after the next presidential election and, in fact, the Trump Administration has already put in place many policies contrary to the agreement. Many states, cities, businesses and other civil entities in the U.S. have acted independently to transform their energy systems from fossil fuels to renewable energy. However, the global community is waiting to see if the U.S. government will get on board with the rest of the world.