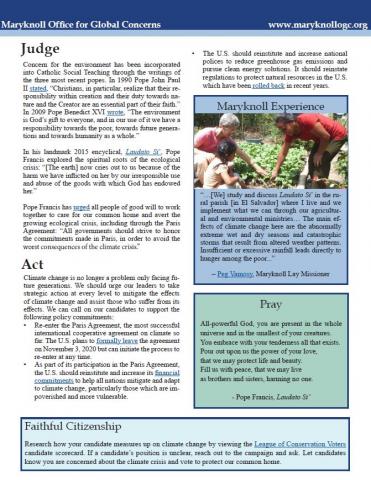 This is an abbreviated version of the issue brief on climate change as part of our series, Faithful Voting and Global Concerns. View the entire brief here and register for a corresponding 30 minute webinar here. The following article was published in the July-August 2020 issue of NewsNotes.

Life on earth is facing a serious threat due to human-induced climate change. A solid scientific consensus indicates that global warming is due to greenhouse gas emissions primarily from burning fossil fuels for more than 200 years. While high-income nations produce the bulk of emissions, low-income nations are most vulnerable to its impacts.

We already see the impacts of a changing climate: loss of sea ice and accelerated sea level rise; extreme and erratic weather patterns, prompting devastating wildfires in Australia and California; increased frequency of extreme storms and floods, and rapidly changing agricultural patterns in many parts of the world.

Based on what the world’s leading climate scientists said in a report in 2018, we have about ten years left to take the necessary steps to prevent irreversible damage from climate change. Doing so will require that we keep the average global temperature rise well below 2 °C (3.6 ˚F) above pre-industrial era levels, and ideally below 1.5 °C (2.7 ˚F).

No country can expect to escape the effects of climate change. Because greenhouse gas emissions and ecological degradation in one place affect the entire earth’s climate, global cooperation is necessary to address this crisis. The most recent and successful cooperation effort is the Paris Agreement of 2015, a landmark accord signed by all 197 countries in the world.

The Paris Agreement requires each signatory nation to offer a plan to reduce greenhouse gas emissions every 5 years. It also creates a fund for countries to contribute to mitigation and adaptation projects, particularly in impoverished countries.

However, most countries have failed to lower their emissions or pledge enough to avoid catastrophic climate change. Frustrated with their governments’ inaction, in recent years youth all over the world have taken to the streets to demand their leaders act to protect their future.

Concern for the environment has been incorporated into Catholic social teaching through the writings of the three most recent popes. In 1990 Pope John Paul II stated, “Christians, in particular, realize that their responsibility within creation and their duty towards nature and the Creator are an essential part of their faith.”  In 2009 Pope Benedict XVI wrote, “The environment is God’s gift to everyone, and in our use of it we have a responsibility towards the poor, towards future generations and towards humanity as a whole.”

In his landmark 2015 encyclical, Laudato Si’, Pope Francis explored the spiritual roots of the ecological crisis: “[The earth] now cries out to us because of the harm we have inflicted on her by our irresponsible use and abuse of the goods with which God has endowed her.”

Pope Francis has urged all people of good will to work together to care for our common home and avert the growing ecological crisis, including through the Paris Agreement: “All governments should strive to honor the commitments made in Paris, in order to avoid the worst consequences of the climate crisis.”

Climate change is no longer a problem only facing future generations. We should urge our leaders to take strategic action at every level to mitigate the effects of climate change and assist those who suffer from its effects. We can call on our candidates to support the following policy commitments:

Faith in action:
Join us for a 30 -minute webinar presentation about this issue brief on Thursday, July 9, 12:30-1:00 p.m. EDT. Register here.
Read about a new Vatican initiative to urge all Catholics to divest from fossil fuels: https://bit.ly/HSdivest