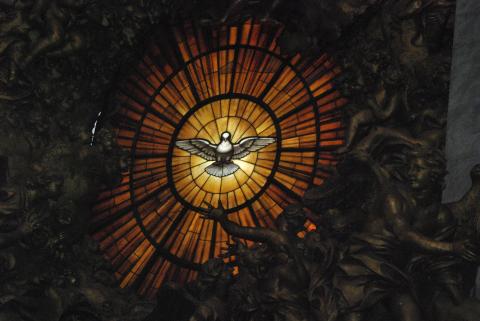 On Dec. 18, more than 500 people from around the world, including members of the Vatican COVID-19 Commission, joined a 3-hour retreat on nonviolence hosted by Pax Christi International. Participants were asked to read the following reflection prior to the start of the retreat and watch a video available at http://bit.ly/RetPxNonv. This article was published in the January-February 2021 issue of NewsNotes.

The turbulence of this historical moment calls us to conversion – a conversion that is soul-deep and world-wide. In this spirit, Pax Christi International's Catholic Nonviolence Initiative has organized a "Christmas Retreat on Gospel Nonviolence" in cooperation with the Security and Ecology Taskforces of the Vatican's COVID19 Commission.

As we come to the end of this challenging year, we invite people around the world to gather with us virtually to deepen the spirit of nonviolence and to reflect together on ways forward to a more just and nonviolent world. In preparation for this special retreat, we offer the following thoughts on Gospel nonviolence.

Pope Francis has helped the Church and the world gain a deeper understanding of active nonviolence. In his 2017 World Day of Peace message, he said that "to be true followers of Jesus today...includes embracing his teaching about nonviolence."  In a letter to Cardinal Blase Cupich he said, "the consistent practice of nonviolence has broken barriers, bound wounds, and healed nations" and pledged "the assistance of the Church in every effort to build peace through active and creative nonviolence." In numerous interviews and statements the pope has promoted nonviolence, and he has taken many actions that dramatize its spirit.

That the Church is rediscovering nonviolence now as a spirituality, a way of life, a strategy for social change, and a universal ethic is not an accident. The human community is facing a spiritual, ecological and social crisis inflamed daily by a worldwide culture of violence, which has only worsened in the wake of the COVID-19 pandemic.  Nonviolence - as both an ancient paradigm of the fullness of life and an increasingly emergent global method for social transformation-offers humankind a powerful way forward in the midst of these massive worldwide challenges.

The modern term "nonviolence" names a central dimension of the vision and mission of Jesus: the thorough rejection of violence combined with the power of unconditional love in action. At the core of Christian nonviolence stands the Sermon on the Mount, Jesus' blueprint, vision and instruction for mature discipleship. He showed us how to live nonviolence, even in the midst of violence and oppression, by calling us to love our enemies, to not kill, to put down the sword, to respond actively to the cry of the poor, and to put sacrificial love into action. The paschal mystery of Jesus's

Cross and Resurrection lays at the heart of Gospel nonviolence. Like justice, peace, mercy and reconciliation, nonviolence is at the core of our identity as Christians and constitutive to our life of faith.

As the global community struggles to respond to the short- and long-term crises of our time, a fundamental shift is needed from systems of exploitation and domination toward a new order of universal communion. What is required in this age is a revolution in consciousness – a shift from the "old story" to a new, nonviolent default-in which the infinite worth of every person is honored, the earth is healed, and the primordial unity of all beings is recognized and acted upon.

Nonviolence is a process for nurturing such an ecological conversion to right relationships among humans and between humans and the rest of the natural world. As a universal ethic, nonviolence offers the Church a theological, pastoral and strategic foundation for the long-term work of struggling for and building the future envisioned in Laudato Si'.  Each of us is called to deepen the journey to this nonviolent future, especially in the midst of this moment of crisis and opportunity.§

Faith in Action: Watch the 45-minute film “The Third Harmony” https://thirdharmony.org/ that was presented during the retreat.