Chile: A New Constitution and an Open Heart 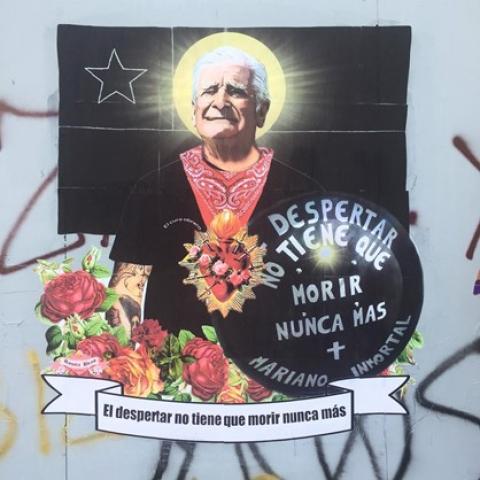 Maryknoll Sister Linda Donavan in Santiago, Chile, reflects on the historic vote for a new constitution. This article was published in the November-December 2020 issue of NewsNotes.

"But if anyone has the world's goods and sees someone in need, yet closes their heart against that person, how does God's love abide there?" (1 John 3:17)

What is happening in Chile is a sign of hope and confirmation that, in fact, God's love abides in Chile.  From the protest in 2019, the broken promises, the continuous worsening of the economic situation, the military called to the streets and the victims of both institutional and group violence,  came the possibility of reframing the Constitution, rewriting a story that makes sense for all of us and where we all fit.

The people have paid dearly for this opportunity. More than 50 percent of elders live below the poverty line.  Many Chileans don't eat three meals a day and the monthly income of a majority of people isn’t enough to cover all the bills.

The neoliberal economic model, championed by Chilean economists trained by Milton Friedman at the University of Chicago in the 1970s and 1980s, made Chile into the "Economic Miracle." But that came crashing down around us as the gains were accrued to the richest in the country. The meritocracy inherent in the system failed and middle and lower classes began to drown in debt.  Even the education myth of more education bringing more opportunity and earnings has fallen apart as privatized education means exorbitant debt.
I could go on, but it is sufficient to say that the model only worked for the few.

The march by more than one million people to the Plaza of Dignity, as the people renamed it, on October 18, 2019 launched a series of protests and a movement. There was a consciousness that these protests were not individual events. And even though there would be violence following the big marches, people would say " I do not agree with the violence, but we need to protest. Things cannot go on this way."

And then COVID-19 struck. The most important thing to note here is that as much as the government tried to regain an image of being in charge and responding to the needs of an already hurting people, it did not work out as they had hoped.

The many months of confinement gave the government a break from the constant violent protests. But the pandemic pushed the people into a much larger and darker hole. Many more people couldn't work, couldn't pay their bills, couldn't count on any kind of health coverage should they get sick, and they were hungry.

When October 18, 2020 came around, the government seemed surprised by  the thousands that flooded the plaza.

It does sadden me, though, that the images that went around the world of that night were of two churches burning. It is not what I would have wanted to happen but what did happen earlier that afternoon -- the thousands of people and families protesting peacefully -- was clearly not what the press chose to communicate.

In 2019, one of the government's better ideas was a national referendum on the writing of a new constitution on October 25, 2020. Voters opted for a new constitution and an overwhelming majority of 79 percent also voted in favor of the new constitution being drawn up by a body which will be 100 percent elected by  popular vote rather than one including 50 percent of members of Congress. The people want and need their voice to be heard.

The evening of October 25 was one of celebration in homes all over Chile and certainly in the Plaza.

Why a new constitution? The 1980 Constitution, written during the dictatorship of Augusto Pinochet, established 18 areas of legislation which were protected by certain laws that would assure their continuance. While it did not specifically state support for a neoliberal economic model, it was written with that worldview as its underlying context, therefore protecting the very system that has hurt so many.

The people want change and are willing to work for it. As I write this from my home here in Chile, civic groups, political groups and others are diving deep into conversations about what needs to be integral to this constitution. It is an exciting time to be in Chile.

Change must happen. The system has failed, as I know it has for so many U.S. Americans. The system  needs to change and Chileans recognized that. Of course, changing systems is never a quick procedure. Elections of the body that will carry out this process will happen in April of 2021 and then we will have one year before Chileans vote again. It is time to pray for and with an open heart.