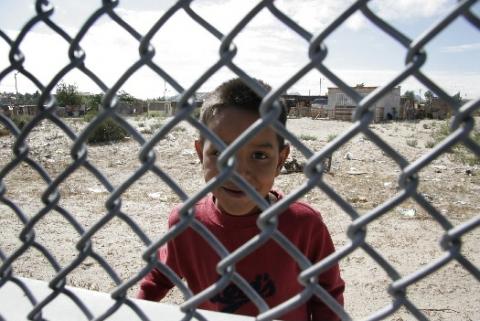 The newly unveiled U.S. policy is of little help to Central American families who live in fear. The following article was published in the July-August 2017 issue of NewsNotes.

For millions in Central America, daily life has become a nightmare to flee. In Honduras, El Salvador, and Guatemala, the countries of the so-called Northern Triangle, gang wars and what some have called “iron-fisted” state countermeasures have normalized violence to the extent that UN officials view the region in the same terms and with the same urgency as violent crises in Africa and the Middle East.  At least 50,000 people have been murdered there in the past three years.

The bloodshed has forced millions to flee, at an estimated rate of more than 500,000 a year. Deepening drastically since 2014, the crisis has bled across the border into the United States with the arrival of hundreds of thousands of migrants seeking refuge, the vast majority of them are unaccompanied children and families.

Facing the humanitarian emergency, however, the previous Obama Administration tried to stem the flow by hardening the U.S. border and by enlisting Mexico to stop desperate migrants at its border with Guatemala, which U.S. security officials now routinely refer to as our own “frontera sur” (Spanish for southern border).  The majority of Northern Triangle migrants – 98 percent, according to rights groups citing Mexican government reports – are now caught and deported by Mexico on their desperate journey north, some 141,000 last year alone.

It’s in this context of crisis that the Trump administration has recently rolled out its own policies for the fractured and bloodied Northern Triangle.

Led by Department of Homeland Security Secretary John Kelly, the administration is actively remilitarizing the region and favors economic policies that would benefit large-scale development over community priorities, strip protections for workers, minority groups and the environment, and would marginalize grassroots participation and deemphasize social programs across the board. Secretary Kelly debuted the policy at a recent summit of regional leaders co-hosted by the U.S. and Mexico, the “Conference on Prosperity and Security,” to which representatives from civil society were not invited.

On the eve of the summit, more than 100 faith-based and human rights organizations – including  Church World Service, Mennonite Central Committee, and the Maryknoll Office for Global Concerns – sent a letter to Secretary of State Rex Tillerson rejecting the Trump Administration’s military-tinted lens.

“An effective response to this forced displacement and migration from Guatemala, Honduras, and El Salvador requires policies that recognize and respect the rights of all individuals to seek asylum in the United States and the region, and foreign policies that address the intersection of root causes and that are based in human rights and in consultation with civil society organizations in the region,” the groups said in their letter  to Secretary Tillerson on June 7, one week before the summit kicked off in Miami with a key note by Vice President Mike Pence. “It is precisely for these reasons that we are concerned with the lack of consultation with civil society organizations from Mexico and Central America…. U.S. policies for the region that lack consultation … limit the extent to which they can be effective, lack accountability and transparency, and may be detrimental to local populations.”

Homeland Security chief Kelly is a combat-hardened Marine commander who led the U.S. Southern Command during the Obama Administration, which privileged military solutions to the regions’ many social problems.  He is the nation’s chief border enforcer and has said he views illegal immigration as an “existential” threat. His toolbox is full of hammers, and social justice advocates fear Kelly sees migrants as so many nails.

Kelly devoted a full day of the summit to closed-door meetings on security deep within the walls of U.S. Southern Command, the Miami-based headquarters for all U.S. military activities in Central and South America, the island nations of the Caribbean, and the surrounding waters south of Mexico, sending “a dangerous signal that citizen security and justice challenges that the Northern Triangle countries face will be addressed from the perspective of the military and defense and not by the State Department and by USAID, which have prioritized development assistance, institution building, and strengthening justice systems,” our letter said.

At the same time, the Trump Administration has proposed a 30 percent cut to the State Department budget and has proposed folding USAID’s operations into what remains of State.

“With fewer resources channeled through traditional means,” said analyst Jake Johnson of  the Center for Economic and Policy research, “it will be the defense attaches, military group colonels, DEA agents, and other security officials that are empowered to lead U.S. foreign policy. They will be the ones holding and administering the carrots,” further shifting the balance of power to those countries’ militaries, “exacerbate[ing] the root causes of increased violence, devastation, and migration.”

In the letter to Secretary Tillerson, the groups called out U.S. reliance on unreliable police and military forces, citing State Department reports documenting the involvement of all three countries’ forces in “crimes such as excessive use of force, unlawful killings, and corruption.” Alongside gang violence, “human rights violations by various state security forces have also been a driving factor of displacement and insecurity in the region,” the letter said.

Kelly’s plans to use Plan Colombia, the longtime U.S.-funded plan aimed at solving the problem of drug trafficking and internal conflict in Colombia, as a model for the Northern Triangle and enlist Colombian security forces to train police and military forces in the region, even though Colombia’s security forces have committed well-documented civilian executions and other human rights abuses. Some critics see the lack of transparency surrounding the security side of the recent summit as giving green light for the Northern Triangle to follow Colombia’s example of extrajudicial justice and counterinsurgency, tactics to cut crime.

The developing strategy is self-sabotaging, bound to reinforce current trends at the expense of the most desperate people involved. Embedded contradictions include the role of U.S. drug demand and plans to deport and repatriate hundreds of thousands of Central Americans in the midst of the crisis. While Kelly admits that the primary driver of the region’s security crisis is U.S. demand for illegal drugs, the Trump administration plans to cut myriad domestic programs and budgets aimed at curbing demand and healing addicts at home. Likewise, President Trump has singled out two main Salvadoran gangs for drug trafficking, while experts agree that the gangs mostly deal locally and are but pawns in a much bigger game controlled by cartels and internationally organized crime involving the region’s corrupt politicians, institutions, and banks.

Another concern is Temporary Protected Status (TPS) for Central Americans to legally work and live in the U.S. On May 22 Secretary Kelly extended TPS for Haitians for only 6 months. At a press conference after a four-hour visit to Haiti on May 30, he emphasized the “temporary” in the immigration status.  Kelly, whose principal job it is to enforce the country’s borders, may be ready to end Temporary Protected Status for nearly 200,000 Salvadorans and some 70,000 Hondurans living in the U.S., only to deport them back into communities where many haven’t lived for decades and where their neighbors and families are fleeing for their lives – despite warnings from experts and government officials that this could overwhelm local capacity and exacerbate the root causes of instability and migration. In El Salvador, for example, such a mass deportation would cut off vital remittances that experts say account for about 20 percent of the country’s GDP.

One year ago, we joined more than 200 faith leaders in a letter to President Obama and then Homeland Security Secretary Jey Johnson calling on the U.S. government to grant TPS to refugees in the U.S. who have fled El Salvador, Guatemala, and Honduras. "We cannot sit idly by while our Central American brothers and sisters are returned to the very violence that has forced them from their homes," our letter said.

The letter to Secretary Tillerson on June 7 concluded with an urgent request to U.S. and Mexican leaders to “ensure that human rights do not take a back seat” and to address the structural violence and root causes of migration in the region, including the legacy of U.S. involvement in Central America based on “America First” policies that never seem to change.

Photo: Boy on Mexican side of the border fence in El Paso, Texas. Photo credit: MOGC