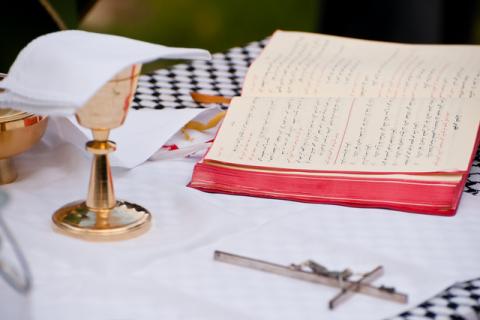 The following article, published in the July-August 2012 NewsNotes, is contributed by Marie Dennis, former director of the Maryknoll Office for Global Concerns (MOGC); since 2007, she has served as co-president of Pax Christi International.

Peacebuilding in its most comprehensive sense includes the transformation of cultural practices or political and socio-economic structures and systems that promote or perpetuate violence; conflict resolution, conflict transformation, the prevention of violent conflict, and the transition to a stable, just, peaceful society after war.  Peacebuilding in the Catholic tradition is fully engaged with all of these dimensions of the work for peace to which it brings the institutional, theological and spiritual resources of the Catholic Church.

Fr. Robert Schreiter, C.PP.S. and others describe well some of the specific characteristics of Catholic peacebuilding.  Examples of each from different corners of the world abound:

As its 50th anniversary approaches, it is worth the effort to read again Pope John XXIII’s great encyclical, Pacem in Terris, that makes so clear the Catholic peacebuilding vocation:  … may Christ inflame the desires of all men [sic] to break through the barriers which divide them, to strengthen the bonds of mutual love, to learn to understand one another, and to pardon those who have done them wrong. Through His power and inspiration may all peoples welcome each other to their hearts as brothers [and sisters], and may the peace they long for ever flower and ever reign among them. (art. 171)