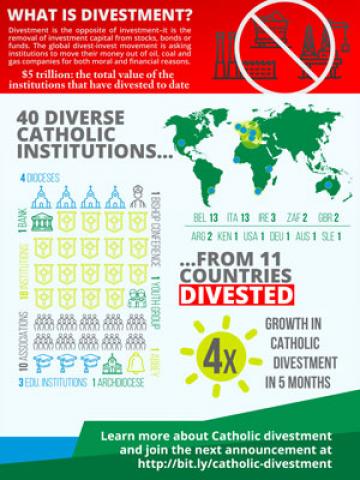 Catholic institutions are divesting from fossil fuel companies and investing in renewable energy as part of their response to the urgent call Pope Francis sounded in Laudato Si’ and in response to the statement by Catholic Bishops from all continents at the Paris climate talks in 2015. The following article was published in the March-April 2018 issue of NewsNotes.

“Put an end to the fossil fuel era…and provide affordable, reliable and safe renewable access for all.”
– Catholic Bishops from all continents in a statement to the UN Climate Change Conference in Paris, 2016.

Last October, a group of 40 Catholic institutions committed to caring for our common home by announcing their divestment from fossil fuels. This is the largest joint Catholic announcement to date. Among the religious communities in the group are the School Sisters of Notre Dame, the Society of the Sacred Heart, and the Australian Jesuit Province. (See the complete list at http://bit.ly/2sXaiZn )

Amy Echeverria, the Director Justice, Peace and Integrity of Creation for the Columbans explained why the international mission society made the commitment to divest from fossil fuels on the Feast of St. Francis, October 4, 2016:

“Columbans have a long history of commitment to care for creation which is reflected in our education, advocacy, networking and pastoral care…With the growing divestment from fossil fuels, particularly within the Catholic world, and in light of Laudato Si’, we see this as a concrete way to further align our mission with our [investment] policies and practices.”

Image: "What is divestment" infographic by Global Catholic Climate Movement.

Divestment is the removal of investment capital from stocks, bonds, or funds. The global divest-invest movement asks institutions to move their money out of oil, coal, and gas companies for both moral and financial reasons, and encourages reinvestment of those resources in clean energy companies that will help solve the climate crisis while tackling energy poverty.

In June of 2016, when four Catholic organizations announced that they were selling their investments in coal, oil and gas companies as the moral case against fossil fuels continued to build, Tomás Insua, Coordinator of the Global Catholic Climate Movement, commented: “These congregations mark the beginning of a new momentum for the Catholic Church. Pope Francis’ encyclical highlights that politics and business have been slow to react in a way commensurate with the urgency of the challenges facing our world. Through divestment from fossil fuels and reinvestment in clean energy, Catholic institutions are starting to use their financial resources to live Laudato Si’.”

Not long after the announcement in 2016, Cardinal Peter Turkson described what he sees as the next steps the Church should take in responding to the global crisis of climate change:

“A genuine examination of conscience would recognize not only our individual failings but also our institutional failings. As Pope Francis says, ‘we are participants in a system that ‘has imposed the mentality of profit at any price, with no concern for social exclusion or the destruction of nature.’ This implicates all of us in one way or another.

“Ecological conversion entails not only individual conversion,” Cardinal Turkson continued, “but community conversion, too. We need a conversion of economics and politics – away from an obsession with short-term and self-centered financial or electoral gains, and toward a true appreciation of the common good.”

Recently, Trócaire, the overseas development agency of the Irish Catholic Church, published a guide for Catholic communities and institutions who are considering divestment from fossil fuels entitled Ethical Investments in an era of Climate Change (available online at http://bit.ly/2EYjRZB). Trócaire concludes:

Faith in action: Learn more from the Global Catholic Climate Movement at http://bit.ly/2ClvUCD