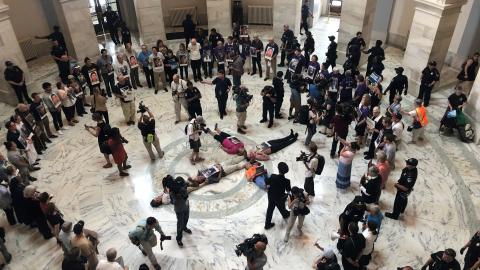 Dan Moriarty of the Maryknoll Office for Global Concerns reflects on his decision to join more than 70 Catholic leaders in a prayer vigil and in nonviolent civil disobedience at the U.S. Capitol on July 18 in an effort to pressure government leaders to end the immoral practice of detaining immigrant children. The following article appeared in the September-October 2019 issue of NewsNotes.

I participated in the Catholic Day of Action for Immigrant Children in Washington, D.C. as a representative of the Maryknoll Office of Global Concerns. But I also participated as a husband and father of two children.

The Catholic Day of Action for Immigrant Children brought together more than 200 Catholic sisters, priests, brothers and lay Catholic advocates, who sang, prayed, and chanted as they demanded an end to the immoral and inhumane practice of detaining immigrant children.

In early July, the Department of Homeland Security released a report showing images of immigrant and refugee children detained in cages, separated from family members, and living in unsanitary, unhealthy conditions. In response, the Maryknoll Office for Global Concerns and thirteen other national Catholic organizations planned this event to be the beginning of a campaign in which Catholic leaders participate in acts of faithful resistance for justice for our immigrant, refugee, and asylum-seeking brothers and sisters, especially children.

After a prayer vigil on the U.S. Capitol Building lawn, which included messages of support from seven U.S. bishops, we moved inside of a congressional office building to continue our prayer and singing and to enable 72 of us to risk arrest with an act of nonviolent civil disobedience.

As I and four other protestors (two Sisters and two lay Catholics) lay on the floor of the Russell Senate Office Building Rotunda, joining our bodies in the shape of the cross, and nearly 70 others encircled us in prayer and singing, I held on my chest a photo of Carlos Gregorio Hernandez Vasquez, a 16-year-old boy from Guatemala who died in U.S. Customs and Border Protection custody in May. He looked strikingly like my own 16-year-old son. Like my son, he loved playing music, and soccer, and taking care of his brother. They could have been friends. Goyito, as his family called him, could have been my son. As we demonstrators prayed the rosary, sang hymns and listened to the stories of these children's lives – vivid present-day illustrations of the Sorrowful Mysteries – I prayed in gratitude for my own family and in repentance for my complicity in Goyito’s death and the suffering of so many other migrant families.

People in the crowd carried photos of Carlos and the other children we know of who have died while held in U.S. custody on the southern border, or shortly after their release, since December. In total, 7 children have died, all but one from Guatemala, ranging in age from 1 year to 16 years old. Before December, no child had died in U.S. Customs and Border Protection custody in more than a decade, according to the Department of Homeland Security.

During our action, Catholics around the country called the White House comment line to tell the President to end child detention. Also, Senator Tim Kaine of Virginia, a Catholic, visited us to offer his support. He joined Senators Jeff Merkley and Chuck Schumer in introducing new legislation, the Stop Cruelty of Migrant Children Act, on July 11.

Seventy-two of us were arrested, with some, like me, committing nonviolent civil disobedience for the first time. As I looked around at everyone sitting together in the Capitol Police processing center, all in handcuffs, some in habits, some in their 80’s and 90’s, some new to this kind of activism and some inspiring movement veterans, I thought of the children in the camps, and Carlos and the others who have died, and realized, surely, this is the communion of saints. This is what it means to be Catholic.

This action was the beginning of a Catholic campaign to end child detention that will continue. The next action is planned for September 4th in Newark, New Jersey, where there will be another prayer vigil and opportunity for civil disobedience. Cardinal Joseph Tobin will be in attendance, as well as various organizations that advocate for and work with immigrants. The third action is planned for October in conjunction with the Hope Border Institute Teach-In in El Paso, Texas. In the coming months, I hope many more Catholics across the country will join us, or organize local actions, and discover for themselves the deep privilege of standing with our migrant sisters and brothers at this crucial time.