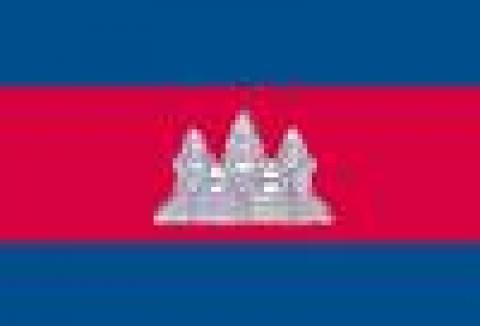 The following article, written by Maria Montello, a Maryknoll lay missioner serving in Phnom Penh, was published in the November-December 2013 NewsNotes.

For the first time in 28 years, Cambodian Prime Minister Hun Sen’s hold on the nation has been challenged. The opposition Cambodian National Rescue Party (CNRP) made huge and unexpected gains in the July 2013 election over the long-standing Cambodian People’s Party (CPP); however, the CNRP claims that widespread "irregularities" (people missing from voting lists, dead people voting, individuals voting twice or in the place of other people, etc.) took place and that the CNRP should in fact run Parliament.

After failed attempts to appeal to internal bodies (which the opposition claims are beholden to or controlled by Hun Sen), the newly elected CNRP representatives refused to take their seats in the National Assembly.

Opposition leader Sam Rainsy, who wants a UN-led investigation into the irregularities, has been making his case to the international community. The new government is illegitimate, he says, and denying citizens the right to vote amounts to a "serious human rights violation," something which, he argued to the State Department and the United Nations on a recent trip to the U.S., legitimizes international intervention per the Paris Peace Agreement of 1991, which ended the Vietnamese occupation and set the path for the 1993 democratic elections.

Despite the U.S. government shutdown, Rainsy’s words did not fall on deaf ears. Sen. Lindsey Graham’s (R-SC) resolution to suspend direct U.S. assistance to Cambodia should the Secretary of State deem the election an illegitimate expression of the Cambodian peoples’ will is likely to be passed by the Senate Foreign Relations committee and move on to a vote on the U.S. Senate floor.

This issue is complex, however. It could be argued that China, Cambodia’s largest foreign investor and major supplier of foreign aid, stands to gain from a U.S. pullout. Reduced U.S. support might give China more opportunity to influence this poor nation for its own political and economic interests. The economic powerhouse, which has cooperated with the ruling CPP in land deals and political "exchanges," was quick to congratulate Hun Sen on his victory.

All the while, there have been protests and a gathering of momentum not seen in Cambodia in decades. Marking the anniversary of the signing of the Paris Peace Agreement, petitions requesting international intervention in the disputed elections, signed by two million Cambodians and carried alongside marchers (estimating from 15,000 to 20,000) who walked peacefully through Phnom Penh’s streets, were delivered to the doors of the embassies of the 18 nations that signed the Agreement.

Youth, who do not remember the Khmer Rouge and are less controlled by fear mongering tactics, seem to be providing significant momentum for the charge. Facts (and perhaps fiction too) about the (mis)deeds of government ricochet through Facebook and other web-based social media, a communication medium the government does not control (though Facebook and other news websites have at times been mysteriously blocked).

Interestingly, an older generation of Cambodians from the countryside—always thought to be a reigning CPP stronghold—have flooded into Phnom Penh for recent demonstrations in support of the opposition CNRP party despite road blocks, intimidation and threats of violence. This new-found courage has come with a strong message: the government is giving away their land to foreign companies in the form of land concessions; corruption and greed are destroying their environments and livelihoods; and, despite Cambodia’s economic growth unparalleled in the region, they remain crippled by poverty and the growing social ills that come with economic inequality.

This is the generation that lived through the atrocities of the Khmer Rouge—as victims, as bystanders, as perpetrators. Some of them are telling the youth to stay home and out of harm’s way; it is their time to stand up where they didn’t or couldn’t in the late 1970s. This is unprecedented.

Unfortunately, messages of reform, social justice, and equanimity from CNRP leader Rainsy come peppered with incendiary anti-Vietnamese rhetoric to shore up support locally. These sentiments are deep-seated and harken back as far as French colonialism and the loss of formerly Cambodian provinces to Vietnam. For some, these sentiments go even further back. They remain convinced that the end of Cambodia’s glory days (marked by the fall the Angkorian Kingdom in the 15th century) was a result of Vietnamese encroachment. This flavor of nationalism is not new to Cambodia and history has shown it does not have good results.

Cambodia suffered countless causalities in the early 1970s at the hands of the Viet Cong with whom they fought under the short-lived regime of General Lon Nol, military actions that (not coincidentally) lined up with U.S. interests. "The enemy of our enemy is our friend" did not pan out well for Cambodia as the U.S. also bombed this country relentlessly during a secret "Vietnam War" campaign aimed at flushing out Viet Cong and destroying supply lines.

Anti-Vietnamese sentiment also fueled the charge by Khmer Rouge leader Pol Pot. Under Pol Pot, Cambodians by the tens of thousands starved as their harvested rice was sent to China in exchange for supplies to fight Vietnam in an ill-fated war.

In recent years, despite movement toward greater cooperation through the Association of Southeast Asian Nations (ASEAN), an organization of which both Vietnam and Cambodia are members, mistrust of neighboring Vietnam simmers for many Cambodians. Political leaders who stir this pot might enjoy short-term gains locally, but they come at a price—increased isolation, growing tension with a highly influential neighbor, and an ideological foundation defined, in part, in negative terms. Cambodia can do better than that.

International support—direct or otherwise—of the process of reform in Cambodia should come with a strong message that, while there are likely legitimate reasons for friction between Cambodia and Vietnam, such issues should not be exploited but rather worked through in the spirit of collaboration and partnership.

The winds of change appear to be moving in Cambodia. While it is unlikely that a "Cambodian Spring" is on the near horizon, recent political activities which have been largely peaceful point to a different sort of Cambodia in coming years. How this future is mapped out is yet to be determined. The international community, once galvanized to pave a path toward democracy for this war-torn country in the early 1990s, would do well to see the job through—and prudently.