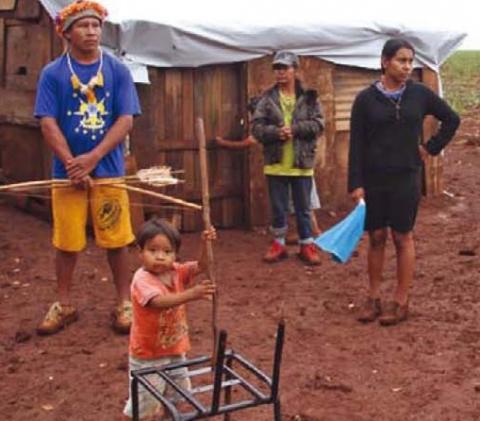 In November, a report was presented by the Social Network for Justice and Human Rights, a human rights organization in Brazil, and GRAIN, a food sovereignty NGO, about land grabbing in Brazil by TIAA-CREF, at the International Seminar on Land Grabbing, at City University of New York Graduate Center.The following article was published in the January-February 2016 issue of NewsNotes.

New York-based pension fund giant TIAA-CREF has been linked to massive land grabs and environmental destruction of the cerrado, the vast savannah on the frontier of the Amazon rain forest. A recent report by Brazil’s Social Network for Justice and Human Rights and GRAIN, a food sovereignty NGO, shows how TIAA-CREF has evaded Brazilian law to spend hundreds of millions of dollars acquiring farmlands from a notorious “grileiro” or land grabber.

A summary of the report is available at www.grain.org/article/entries/5336-foreign-pension-funds-and-land-grabbi....

The financial crisis of 2008 and subsequent surge in food prices spurred many private equity funds, banks, and agribusiness corporations to buy farmland as a secure investment with high returns. Often taking advantage of unclear land titles of indigenous peoples and small holder farmers, through the complicity of corrupt local governments, millions of acres of land have been bought in Africa and Latin America and turned into vast industrial agriculture plantations for export commodities and biofuels. The report states:

“This global land grab is a massive transfer of vital food producing resources from poor rural communities to wealthy global elite. Through these deals, families and communities are losing their farms and forests, while farming and pastoral systems that produce food for local people are being wiped out to make way for industrial plantations producing food for export. Many of these land deals are happening in countries where food insecurity and access to land and water are already at critical points. The people who are dispossessed of their lands or affected by the new large-scale plantations are rarely consulted, as many of the deals are negotiated and signed between foreign investors and government officials behind closed doors. With so much at stake, it is no wonder that protests are erupting in many areas where the lands are being grabbed, at times resulting in violent clashes and even deaths.”

TIAA-CREF has been one of the largest investors in farmland, spending $2.5 billion acquiring land overseas between 2007-2014. While it prides itself in promoting social responsible investment, TIAA-CREF’s land acquisitions in Brazil follow a pattern of shell companies or subsidiaries that evade Brazilian law intended to limit such extensive foreign ownership of farmland. In spite of its pledges to transparency, TIAA-CREF refuses to disclose the locations of its Brazilian landholdings and the details of how it acquired them.

However, the report documents four farms bought by TIAA-CREF that were linked to Euclides de Carli, a Brazilian grileiro accused by indigenous farmers, human rights groups, and legislators of violently forcing people off their farms and destroying their crops. A number of communities told the researchers of being expelled from their lands repeatedly and having their access to water cut off.

In addition to the human rights abuses associated with land grabbing, the environmental degradation is considerable: the deforestation of the savannahs and pollution of the waterways from pesticides and agrochemicals associated with industrial farming are widespread. The indigenous communities interviewed by the human rights researchers reported polluted drinking water and wells from aerial spraying of pesticides and an increase in cases of cancer, respiratory problems and skin diseases.

Though it claims to promote socially responsible and sustainable investment in land, TIAA-CREF does not appear to be following its own standards in Brazil; the report concludes, TIAA-CREF “is in effect ‘outsourcing’ land grabbing to local businessmen well known for their violent and illegal tactics for evicting people. Small farmers and indigenous people in Brazil are paying much too high a price to support the pension funds of workers in the U.S., Canada and Sweden.”

Photo: An indigenous family displaced from their land by the expansion of agribusiness in Mato Grosso do Sul, Brazil. Photo by Cristiano Navarro / GRAIN