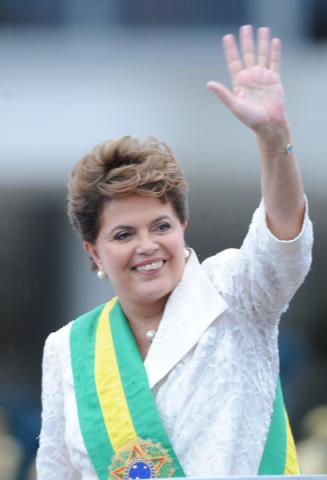 The following is written by Dave Kane, who works for the Maryknoll Office for Global Concerns from his home in João Pessoa, Brazil.

Every year around this time, students across Brazil hold marches against announced bus fare increases. Usually it is hundreds or even a few thousand students closing down major streets for a few hours and then going home with no other real effect. But this year, for a variety of reasons, the marches "caught on" and grew in size and number in every state. While it was progressive organizations like the Free Pass Movement (MPL) that organized the marches, this year, with complaints about public services, as the protests grew in size, conservative forces tried to take control of the marches to make them appear to be a generalized clamor against President Dilma Rousseff. By reacting quickly to the protestors, the president was able to regain control of the political agenda.

The first protests were on June 6 in São Paulo, Rio de Janeiro and a few other major cities and followed the usual routine with about 5,000 protestors in São Paulo, the largest Brazilian city. But follow up marches found more and more people adhering. As is also traditional, the major TV stations covered the marches minimally, portraying them as acts of vandalism and encouraging the police to repress the marchers to help keep traffic flowing. They focused exclusively on the handful of protestors throwing rocks, while ignoring the masses of peaceful demonstrators.

Many point to the excessively violent response from the police during the fourth march in São Paulo (with an estimated 20,000 people) on June 13 as the act that gave the protestors added legitimacy and incensed enough people so that the fifth march on June 17 included more than 200,000 people and parallel marches proliferated in hundreds of other cities. But there were other reasons for the sudden increase in numbers, as we explain below.

Many Brazilians are increasingly frustrated with the poor quality of their public services. In large cities like São Paulo, workers spend 3-4 hours every day in overcrowded buses and subways, go to public health clinics that have neither doctors nor medicine, and send their children to schools with overwhelmed teachers and scarce resources. At the same time, they hear announcements about the billions of dollars the government is spending to prepare the country to host the World Cup in 2014 and Olympics in 2016 – money that the same government has always said is simply not available to improve health or education. During the first protests, in fact, the mayor of São Paulo and governor of the state of the same name were in Paris competing to become the host for the 2020 World’s Fair.

All of these issues and more helped spark the protests. But another less known reality is also behind them: Much evidence exists to suggest that conservative forces are trying to use the protests to weaken President Rousseff and push a conservative agenda.

In many cities, activists have reported similar occurrences. While the initial protests, organized by the MPL, were centered on issues important to low income families (bus fares, public hospitals and schools) and contained many youth in red shirts with flags carrying emblems from various progressive social movements and political parties, suddenly, beginning around June 17, the marches began to have a different "feel."

Rather than the hand-written posters used by protestors until then, many of the new demonstrators appeared in the marches with industrially produced posters (paid for by whom?) with demands very different from those of the MPL, such as "no taxes," "no corruption," "impeach Dilma." Some even called for a return to military rule. The chants became more nationalistic, less progressive, the national hymn now regularly sung during the marches.

Members of progressive movements and parties were intimidated. Groups shouting, "The people don’t need political parties" accosted those carrying flags of political parties, and demanded that they take them down, ripping up or burning the flags if they refused. In some cities, new marchers physically attacked activists wearing red shirts for no apparent reason. Vandalism increased while the police began to take a more hands-off attitude; in some instances, they watched while people burned buses, looted stores and destroyed public buildings. In São Paulo and elsewhere, neo-Nazi youth, who many believe were paid to be violent, were some of the most aggressive rioters.

Also beginning on June 17, mainstream TV news stations, especially the dominant Globo network, radically reversed their posture toward the protests. Suddenly, instead of being comprised principally of vandals and rioters, the marches were portrayed as predominately peaceful citizens exercising their right to protest with a few bad apples trying to ruin things. Coverage of the marches began to completely dominate Globo’s national news hour and other programs, even though the Brazilian soccer team was hosting an international tournament, the Confederations Cup, at the same time, perhaps the first time the national team has been so upstaged.

TV news and opinion announcers expressed their delight at seeing that "The Giant Awoke" ("O Gigante Acordou"), a phrase they repeated frequently. Throughout the day, TV programs were interrupted to show scenes from another city’s protest, making it seem that the government was losing control. Instead of being protests of a handful of rabble-rousers, suddenly the marches were portrayed as clear signs of the public’s growing distaste for President Dilma and her Workers’ Party government. Corruption became the dominant issue for the media instead of public transportation and other services.

Older Brazilians were already familiar with the slogan, "O Gigante Acordou," for this was the same catchphrase used during the famous "March of the Family with God for Liberty" on March 19, 1964 in which demonstrators complained about progressive President João Goulart "communistic programs" and asked the military to take control. The military happily obliged on March 31 with a late night coup, initiating a dictatorship that would last until 1984.

As in 1964, the right in Brazil today is unhappy with a progressive president in office. Despite the fact that both Rousseff and her predecessor Luis Inácio da Silva have high levels of approval and neither has proposed anything nearly as radical as the land reform and expropriation of oil refineries that Goulart planned, conservative forces still struggle to remove her from office. The marches appeared to be a good opportunity to advance their causes.

Yet by responding quickly, Rousseff was able to define what the marches were really about – public services, not impeachment. After an emergency meeting with her ministers on June 21, the president made a public address in which she said she had heard the protestors and would respond quickly to their demands regarding transportation, education and health care as well as have a meeting with leaders of the protests, specifically mentioning students, unions and other progressive organizations.

On June 24, she held a meeting with mayors and governors from all 27 states, at which she announced a number of initiatives to improve public services. For transportation she pledged to lower taxes for buses and trains so as to lower prices and to spend an additional $50 billion nationally on transportation. To improve access to health care, she announced increased investments and a surge in the number of medical residencies.

More controversially, she announced that Brazil would import thousands of doctors willing to work in rural areas and underprivileged neighborhoods, areas where Brazilian doctors traditionally avoid working. "We will first offer positions to Brazilian doctors. Only after that will we call foreign doctors. But it needs to be clear that the health of our citizens should prevail over whatever other interests," said the president. For education, she proposed that 100 percent of the royalties and 50 percent of the resources produced by the pre-salt oil fields off the shores of Rio and São Paulo to be applied to education.

In addition to these "wins" on a national level, dozens of cities have reversed bus fare increases or even reduced fares, showing that the marches have been successful from the point of view of the original organizers.