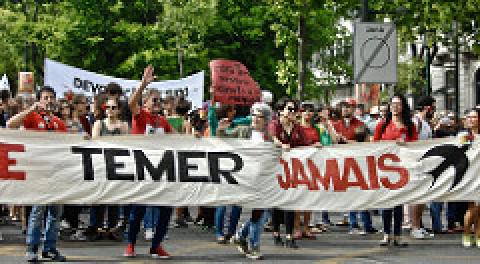 The Brazilian small-scale farmers movement led a hunger strike in the first week of December as part of the massive protests against what some have called the most socially regressive austerity package in the world. The following article was published in the January-February 2018 issue of NewsNotes.

Members of two small-scale farmers’ movements recently suspended their hunger strike after ten days when Congress decided to delay its vote on social security reform until February 2018. The reforms would raise the retirement age and lower the amount received. This reform follows a series of unpopular actions by President Michel Temer, which some say are aimed at reducing the federal deficit. Yet a number of other actions taken by Temer seem to contradict the rhetoric about lowering the deficit.

Temer’s first act after assuming the presidency in 2016 following the controversial impeachment of Dilma Rousseff was to reorganize the cabinet of ministers. This drew much drew criticism. He appointed only men - 1979 was the last time there were no female ministers. He also weakened the General Controller of the Union, an agency designed to root out governmental corruption, by removing its autonomy, an act criticized by the United Nations and other international partners.

With a strong emphasis on reducing the federal deficit, Temer has advocated for severe spending cuts. He pushed for a Constitutional amendment establishing a 20-year ceiling on government spending, limiting annual increases up to the rate of inflation; basically a freeze on real government spending, though public debt payments to large banks are not included in the limit.

In addition to establishing this strong ceiling on overall spending, Temer shut down the “Popular Pharmacy” program that provided lower cost medicines for low income families and the “Science Without Frontiers” program that had sent 93,000 students to study science in other countries. He has also enacted severe cuts in the “My House My Life” program for low income housing and “Light for All” aimed at extending electricity to all Brazilians. He increased the minimum wage less than the rate of inflation for the first time in 14 years.

These types of cuts are especially onerous as the economy slowly pulls out of a three-year recession that has driven many into poverty. At the end of 2016 Brazil had 24,8 million people living on less than one-fourth of the minimum wage or R$220 (US$67.90) - 53 percent more people than in 2014. Considering the World Bank’s definition of extreme poverty, US$5.50 per day there were 52.2 million living in extreme poverty.

And Temer’s rhetoric about needing to reduce the federal deficit ring hollow for, while drastically cutting programs needed by the increasing number of families in need, he is spending lavish amounts on corporations. He granted tax amnesty to corporations totaling more than R$2 trillion (US$617.3 billion), an amount that alone would pay for the education budget for more than 22 years.

Temer has also maintained a number of financial subsidies and tax rebates for businesses, nicknamed the “Businessman Basket,” a reference to the “Family Basket” an income supplement program for poor families. These bonuses for businesses will total an estimated R$224 billion (US$69 billion), seven times the Bolsa Family program. In addition to benefits for domestic firms, Temer recently voided taxes for foreign petroleum companies working in the offshore oil fields that he recently sold in a controversial move. The loss in taxes will total R$1 trillion (US$308.6 billion) over 25 years.

Finally, Temer has also greatly increased federal spending on media. While president Rousseff cut publicity spending by 34 percent in 2015, Temer increased such spending by 65 percent in his first six months. More recently, on December 18, attorney general Raquel Dodge questioned Temer’s spending almost R$100 million (US$ 30.9 million)  to “convince the population that the social security reform is not a regress,” asking the Supreme Court to suspend the payments.

Despite this spending on propaganda, the social security reforms continue to be unpopular. While the delay of the vote in Congress has temporarily calmed protests, the farmers who led the hunger strike continue to organize against the measure and other unions plan to increase protests as the vote draws closer.