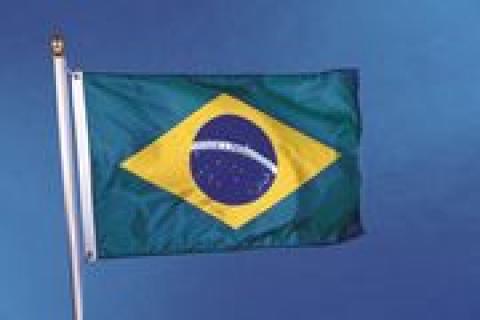 The following piece appeared in the November-December 2013 NewsNotes.

Over the past few months, huge protests in Brazil have become international news. The principal demands of the protestors have been for improvement in social services, especially transportation, health and education. Though completely overlooked by the media, one of the main reasons for the poor quality services in Brazil is the overwhelming amount of public money that continues to go toward paying the debt. The government currently pays more than one billion dollars every day toward the debt – money that could be used to respond to the demands of the people. In 2012, the federal government dedicated 44 percent of its budget to debt payments while only 4.1 percent went to health care and 3.3 percent to education. In response, Brazilian civil society has a surprisingly simple demand: Carry out an official audit of the debt.

Many felt that Brazil overcame its debt problems in 2005 when it paid off the last US$15.5 million that it owed to the International Monetary Fund (IMF). The payment was much celebrated in the press and by the government that had long complained about the IMF’s meddling in its internal decisions. But in order to make the payment the government simply issued bonds (thus increasing Brazil’s internal debt). So, in reality, the debt was not paid off – it was simply moved to another creditor. Worse, while the IMF was charging a mere four percent interest on its loans to Brazil, the government was paying out 19.3 percent interest on its bonds (its internal debt), so economically, the deal was a failure. Worse still, the touted political freedom from the IMF didn’t happen: On the same day that Brazil paid off its debt to the IMF, then Finance Minister Antonio Palocci issued a declaration saying that the payment to the IMF in no way meant that Brazil would sever its ties with the IMF or stop receiving advice from the institution.

The debt has become an ever-growing snowball with no end in sight. In 1978, Brazil’s external debt was US$52.8 billion. Yet even after paying US$262 billion in debt payments, the total debt had grown to US$243 billion by 2007. Today, it totals more than US$441 billion. Perhaps more concerning has been the explosion in Brazil’s internal debt. In the early 1990s, it was barely notable. But since then, it has been used to attract the dollars needed to pay the external debt. In order to attract dollars, Brazil’s central bank raised its interest rates (the rate that is paid on its bonds) tremendously, rising to as high as 45 percent in 1997. Investors would buy the bonds with dollars to be paid back in Brazil’s currency, the real. As a result, the internal debt went from R$62 billion in 1995 to R$1.39 trillion in 2007, even though it paid more than R$651 billion, just in interest, during that time period. Today, Brazil has an internal debt of more than R$2.8 trillion (~US$1.3 trillion).

This story has been repeated throughout the continent. According to Jubilee South, in 1970 Latin America owed US$32.5 billion. In 2002, that sum had jumped to US$727 billion despite the countries making more than US$193 billion in debt payments. "We paid the debt six times over, and even so, it multiplied by more than 20," exclaims Jubilee South.

The 1988 Constitution called for an official audit of the Brazil’s debt to be carried out yet this has never happened. In 2009, civil society organizations pressured Congress to carry out a Parliamentary Commission of Inquiry on the debt. That investigation found a number of surprising facts. Of the debts they investigated, 80 percent had no documentation proving the loan was actually made and/or how much had been paid. They also found a number of onerous clauses in the debt contracts. For example, 34 percent of the contracts demanded that Brazil not institute any type of control over capital leaving the country, while 37 percent demanded that Brazil pay its debt obligations before any other public spending. Almost a third of the contracts were for loans that could only be used to buy goods and services from countries selected by the creditor.

The investigation also found that only 12 financial institutions are allowed to buy Brazil’s internal debt directly, and that short list includes international banks such as Citibank, JP Morgan, HSBC, Deutsche Bank and the Royal Bank of Scotland, together with some Brazilian banks and investment fund managers. Knowing this, they were especially concerned about another finding – that the Selic, the main interest rate for Brazil (and the rate that it pays on its bonds, or internal debt), is not determined by a set formula or defined characteristics, but through consultations with bankers and investment fund managers. In other words, the same institutions that directly benefit from the rising or falling of the Selic are the same people who are consulted to define that rate – a serious conflict of interest. These findings give more urgency to the call for an official audit of the debt.

Maria Fatorelli, a financial auditor and coordinator of the Citizen’s Movement for an Audit of the Debt, estimates that the debt would shrink by as much as 70 percent if an audit were done. This estimate is based on experience. Fatorelli was a member of the team that in 2006 carried out an official audit the public debt in Ecuador, a country with a debt history very similar to Brazil’s.

After investigating all of the debt contracts made by Ecuador, they found that a large number of the debt contracts showed no proof that the government had in fact received the money that it was paying back. Numerous debt contracts were also carried out without the proper authority or clearance. In the end, President Rafael Correa renegotiated the debts, paying 30 cents on the dollar, and 95 percent of the creditors accepted these conditions, waiving the right to sue in any court.

The results for the Ecuadoran people were astounding. With the freeing up of US$7.7 billion that would have been sent to foreign creditors, social spending in the country more than tripled in five years. (See graph below; the red bars [right] represent debt payments, while the blue bars [left] represent social spending on health care, education, transportation, etc.) 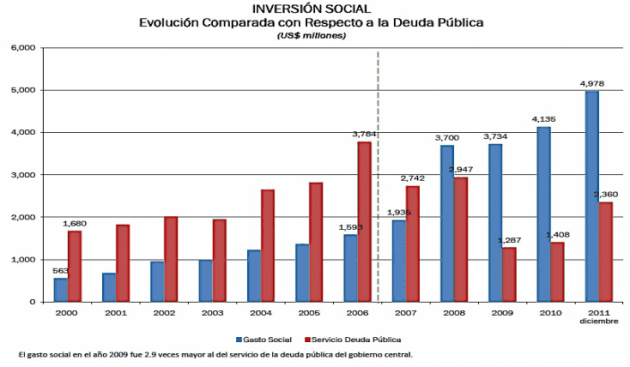 Fatorelli also points to Brazil’s own experience with its last official audit of the debt in 1931. It found that only 40 percent of the debt had sufficient documentation and that there was no control or recording of payments made to other countries. As a result, Brazil drastically reduced its external debt and interest payments shrunk from 30 percent of exports in 1930 to only seven percent of exports in 1945. This freed millions of dollars that were spent to help create an economic boom in Brazil.

It is experiences like these that make the idea of an audit of the debt so important. Looking at the current state of public spending in Brazil (see graph below; the top line [blue] represents debt payments, second line [green]: social security; third [purple]: public sector salaries and benefits, fourth [red]: health and sewage; bottom line [turquoise]: education and culture), it is not difficult to imagine the significant positive impact on the Brazilian people if their tax money could be spent on things like health care, education and transportation instead of filling the coffers of international banks. When you hear about protests in Brazil, remember one easy way that the government could provide better quality public services: Simply carry out an audit of its public debt. 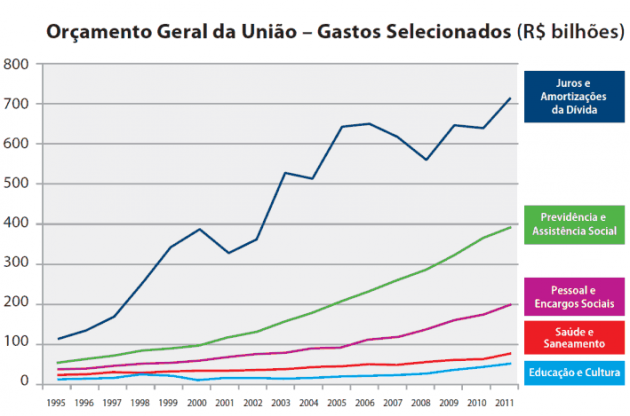