Brazil: International investment in the Cerrado 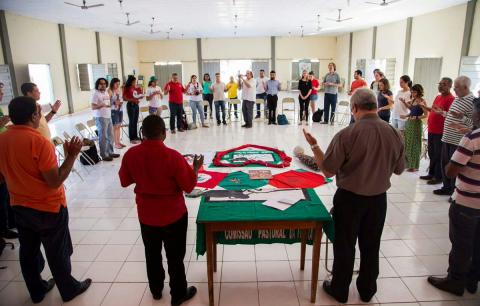 A fact-finding mission in 2017 has led to changes by the World Bank and the government of Brazil to address land grabbing and environmental destruction by plantations connected to international investment funds. The following article was published in the May-June 2018 issue of NewsNotes.

For decades, local and international campaigns have focused on the issues of deforestation and land conflicts in Brazil’s Amazon region. Yet in the neighboring Cerrado region, the most biodiverse savannah region in the world and birthplace of many key rivers and aquifers, forests are being destroyed at a much higher rate and land conflicts are increasing and intensifying, thanks to actions by international investment funds.

Thanks to affected communities organizing and international groups standing in solidarity with them, significant progress has been made in protecting the environment and the people of the Cerrado over the last year.

In September, a group of about 30 human rights, development and rural experts visited communities in the state of Piaui to investigate reports of increasing land conflicts and deforestation involving international investment funds.

Dave Kane, former Maryknoll Lay Missioner and current researcher for the Maryknoll Office for Global Concerns based in Brazil, joined the ten-day fact-finding mission and wrote a 17-page report “Brazil: Human and Environmental Costs of Land Investments” documenting how, over the last decade in this part of the Cerrado, wealthy investment pools in the Global North (mostly pension funds and endowments) have purchased large plots of land which they have had deforested and developed into plantations of single crops, like soy or corn, produced for export, and often with devastating effects on local communities.

Representatives of more than 20 communities told observers about their experiences with recently-established large plantations, sharing stories of plantation officials making threats and using outright violence to force families off of their ancestral and communal lands.

“We are small and there are these big farmers out there who never lived here. They come and trample on us saying that where we live and work is the reserve for their plantation.”
– Anonymous elderly woman in the Melancias community

They also shared stories of the environmental damage caused by these plantations: desertification due to highland deforestation, pollution of streams and wells by agrochemical runoff, destruction of subsistence crops by pests which flourish on the single-crop plantations, and the loss of biodiversity in flora and fauna.

“I pity children born today because there is a lack of water in the rivers and fertile lands that we can work to provide enough quality food for our children.”
– Jaime, a young adult volunteer with the environmental group Progea

Community members cited the lack of clear title to their lands as an urgent problem. Even after living on their land for many generations, most families do not have free and clear title because the state has failed to regulate land titles, even though a new law (Piaui state law 6.709/2015) was meant to do just that. Instead of helping small family farms, however, community members said the law is helping to legitimize the plantations’ claims to lands they obtained illegally.

“Go to where? Sell what, to buy things in the city? Look at our city, you were there. Everything is expensive there and we don’t have anything. You all don’t understand how we live. We are here today but don’t know if we will be tomorrow."
– Maria dos reis Alves of the Barra da Lagoa community

At the end of their research mission, the international observers held public hearings at the local, state and national levels to share their findings. At one of these hearings, the Federal Public Ministry (MPF, somewhat analogous to the Office of the Attorney General in the United States) expressed interest in learning more about how international investment funds, such as TIAA, use Brazilian subsidiaries to avoid legal limits on foreign ownership of land.

Response from the government of Brazil and the World Bank

Two months later, the MPF held its own public hearings in the areas visited by the caravan. As a result, on December 18, the MPF sent a recommendation to the Piaui land regulating body, Interpi, and the World Bank, to immediately suspend implementation of the law in order to consult with affected traditional communities, carry out an anthropological study of how land in the region has been occupied, and to rewrite the law to include the possibility of collective land ownership to “prevent and remediate violation of the territorial rights of traditional peoples and communities.”

The MPF’s recommendation was reinforced by a letter from U.S. civil society organizations delivered to the World Bank at its Land and Poverty Conference in Washington D.C. on March 21.

Shortly thereafter, a representative of the World Bank, Adalberto Costa, traveled to Piaui to hear from affected communities. At two public meetings, Costa reiterated that close to 80 percent of the Bank’s $120 million project there is spent on health and education and only $5 million goes toward land titling. But Costa said that the project will be revised with help from Interpi and the communities themselves to get land titles to communities of former slaves and indigenous and traditional communities. He also said that the Bank will support an anthropological study and visit again in June.

Response in Europe and the United States

In January, European members of the caravan brought affected communities members to the Netherlands, Belgium, Germany, and Sweden to meet with government officials and pension fund managers about their investments in large plantations in the Cerrado. And in the United States, members of the caravan are beginning to approach the endowment fund of Harvard University, a big investor in the Cerrado, after the release of an investigative report into allegations of the fund’s involvement in title fraud, illegal deforesting, and violent expulsion of farmers from their lands.

Photo: Bishop Marcos A. Tavoni (right of table) prays with members of the fact-finding mission on the first day of their 10-day investigation in northeastern Brazil. Photo by @ONGFase and posted on Twitter on September 6, 2017.