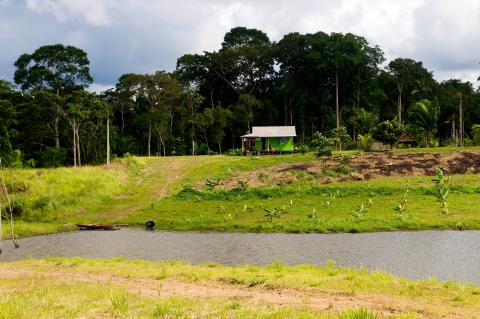 A new investment fund in Brazil aims to support small-scale, sustainable agriculture.The following article was published in the September-October 2020 issue of NewsNotes.

Landless and family farm movements in Brazil have launched an investment fund, Finapop (Popular Financing Program of Family Agriculture for Healthy Food), that will soon allow small-scale investors to support sustainable family agriculture in Brazil while earning a guaranteed 4 to 5 percent in financial returns. The fund aims to be more responsive to the needs of small-scale farmers than traditional lending institutions and help fortify family farms that produce up to 70 percent of staple foodstuffs in the country.

This initiative was founded by the Landless Workers Movement (MST), other landless movements, small-scale farmer movements, and farmer unions. The MST is a movement of landless farmers who occupy unused land in Brazil in an effort to redistribute land to rural workers and promote small-scale, sustainable family farming. The MST was founded in the 1980s and is the largest social movement in Latin America, now including about 370,000 families.

The MST responds to the long-standing, deep inequality of land ownership in Brazil, where approximately 2 percent of the population owns about half of all agricultural land. An article of the 1988 Brazilian Constitution stated that unused agricultural land should be redistributed to farmers, and the MST seeks to fulfil that obligation. But there have been numerous roadblocks to doing so, including the credit and banking systems in the country.

João Pedro Stedile, long-time leader of the MST (Landless Workers Movement), believes the fund will improve the situation of credit for family farmers while also providing better returns for those with savings to invest. Currently, he says, banks in Brazil charge an average of 48 percent annual interest on their loans – far too high for small-scale farmers.

The government has a National Program for the Fortification of Family Agriculture that offers loans to farmers with only a 6 percent interest rate, but the bureaucracy has proven to be very difficult and the program tends to favor larger farms.

The National Bank for Economic and Social Development also has a program for farmers, but it can take many years to approve a project. Finapop promises to be far more responsive, as it is designed specifically for loans to cooperatives and associations of sustainable family farms, with much more advantageous terms. Farmers will have a one-year grace period and then five years to pay off the loan at only 4 to 5 percent annual interest.

While charging high interest rates on their loans, Brazilian banks provide minimal returns on savings accounts, averaging only 2.1 percent per year. With Finapop, investors will receive a 4 to 5 percent return on their investment, as most of the professionals involved in managing the fund – from lawyers to financial experts— are volunteering their time, thus keeping overhead costs to a minimum.

Finapop began in early 2020 with R$1 million (U.S. $182,000) raised from anonymous donors, which it loaned to projects in the southern part of the country, where landless movements have a strong presence. Some of the first projects supported included bakeries on landless settlements, honey cooperatives, and machinery to produce dairy products such as yogurt and cheese. A collection of farmer cooperatives joined together to build a glass factory to make receptacles for their organic agricultural products.

The hope is that in November, Finapop will begin its third installation of loans with money from small-scale investors; so far, more than 1,750 plan to invest. The fund managers have approved 10 projects totaling R$25 million for projects such as milk production in northeastern Sergipe state, credit co-ops in various states, and a family agriculture certification project. Initially, the project will only be open to Brazilian investors, but they hope to allow for international investors in the future.

Finapop represents an important opportunity for sustainable family farmers in Brazil. For the first time they will have access to credit at better terms than their larger competitors. In addition, people from around the country, perhaps the world, will be able to help them create a healthier and more just agricultural system. In a video conference about the fund, one of the founders, economist and engineer Eduardo Moreira, explained that “Finapop appears today to say, ‘Stop, because the world is all wrong. Let’s encourage the world that we believe in.’”

Photo: A family enjoy the afternoon on a smallholders farm along the BR-364 highway in Acre, Brazil. Photo by Kate Evans/CIFOR, available on Flickr.