Brazil and the Coronavirus 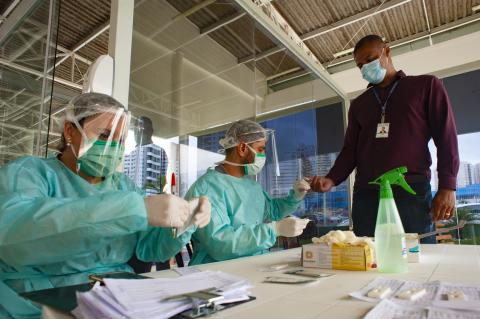 The Brazilian government has been slow to respond to the coronavirus pandemic on the federal level, but local governments and community organizations are working hard to care for vulnerable people. The following article was published in the May-June 2020 issue of NewsNotes.

There are striking similarities in the responses to the COVID-19 crisis by the U.S. and Brazilian federal governments. Both have focused their responses on measures meant to slow the spread of the virus and to provide for workers’ lost wages. Much more is being done by local governments and community organizations to help vulnerable people through the crisis.

President Jair Bolsonaro, a supporter and ally of President Trump, has repeated many of President Trump’s early statements regarding the virus, including comparing the health effects of the virus to that of the common cold and emphasizing the potential of chloroquine as a possible treatment. The right-wing populist has also emphasized that “the cure cannot be worse than the disease” and has urged for the rapid reopening of the economy.

Like in the United States, the management of the virus has become highly politicized, with supporters of the president calling for an immediate end to quarantine and a re-opening of the economy while others insist on stronger social isolation measures. Brazilian society has reacted with state and local governments and community organizations taking the lead in responding to the virus, implementing a variety of measures, including quarantines.

On March 22, President Bolsonaro published his first presidential decree related to the virus, the most controversial being a measure allowing businesses to suspend employee salaries for four months without any financial support for workers. After an uproar from around the country, he removed this measure and later proposed a one-time payment of R$200 (U.S. $40) for informal workers. The Brazilian Congress later increased that to three monthly payments of R$600 (U.S. $120) which have been delivered to many workers. However, some have slipped through the cracks of the government system, resulting in long lines of people waiting at banks, hoping to get their names on the list to receive the benefits.

President Bolsonaro’s concern about the cure not being worse than the virus is somewhat valid given the impossibility of social distancing for many Brazilians due to poverty, crowding, and poor sanitation. Millions of people have no savings, as they live on what they make each day. Many live in cramped homes, with sometimes ten people sharing a one-bedroom house. Forcing people to stay inside in such conditions could be considered cruel, especially as domestic violence and suicide rates have increased in places with quarantines.

With the lack of federal action, local communities have stepped in to fill the void. Soon after authorities in Rio de Janeiro confirmed the first death from COVID-19 – a 63-year-old domestic worker who caught the virus from her employers who had recently returned from Italy – gangs shut down tourism of the city’s crowded slums known as favelas and initiated limited curfews. Community associations formed teams of volunteers to monitor families block-by-block, helping families that need food, medical care, and hygiene products as well as sharing general information about the virus.

The Landless Workers Movement (MST), a group working for land reform, has provided hundreds of tons of food to urban and rural communities in need and has begun producing soap and 70 percent alcohol for hospitals, while teams of tailors and seamstresses sew masks for donation. The movement has also offered its schools and other larger buildings for use as overflow hospitals where needed.

The indigenous population, numbering about 800,000, faces additional threats, as many communities have limited contact with the outside world, making them more vulnerable to infection. They also often live hundreds of miles from adequate healthcare facilities. Indeed, Manaus, the city in the center of the Amazon, is already the largest virus “hotspot” in Brazil, with the highest per capita rate of infection and more than 90 percent of ICU beds already in use.

Since Bolsonaro’s election, there have been more and increasingly violent invasions of indigenous lands, as the president has often spoken of the need to open up indigenous lands for “development” by mining, logging and agribusiness interests.

In response to fears of the virus, some indigenous communities in the Amazon region are splitting into smaller groups and retreating into their territories, a strategy that has allowed them to survive extinction during past epidemics of the flu and measles, brought by Europeans.

Faith in action: Read and share our statement in solidarity with Amazonian indigenous peoples facing the novel coronavirus:
https://bit.ly/AmazonCOVIDprotect

Photo of drive-through coronavirus testing in Brazil by Senado Federal available via Flickr.