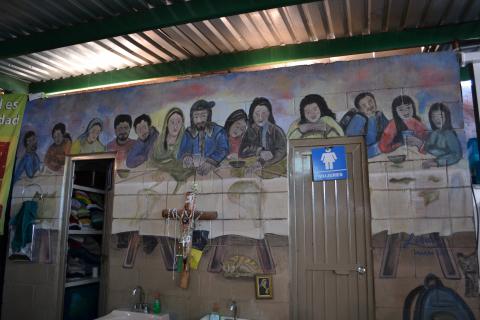 Immigrant social service agencies on the U.S.-Mexico border are preparing for rapid changes in the months ahead. This article was published in the January-February 2021 issue of NewsNotes.

A webinar hosted by the U.S. Conference of Catholic Bishops on December 7 featured four leaders of Catholic social service and advocacy organizations on the U.S.-Mexico border discussing current border policy and anticipated, dramatic changes ahead. These were Dylan Corbett of Hope Border Institute in El Paso, Texas; Teresa Cavendish of Casa Alitas shelter in Tucson, Arizona; Sr. Norma Pimentel of Catholic Charities of the Rio Grande Valley (CCRGV) in McAllen, Texas; and Fr. Sean Carroll of the Kino Border Initiative in Nogales, Arizona.

All four leaders spoke about the impact of the Migrant Protection Protocols (MPP) policy on their work with migrants at the border. Implemented in January 2019, MPP requires migrants who arrive for processing at the border to wait in Mexico while their U.S. immigration cases are being processed.

MPP has led to the creation of large camps of migrants living in tents or temporary shelters in Mexican border towns, in poor conditions and often without access to work, education, physical safety from gangs or inclement weather, or legal counsel. Ashley Feasley, webinar moderator and director of policy on immigration issues for the U.S. Conference of Catholic Bishops, said there have been about 68,000 migrants returned to Mexico through MPP. MPP has been widely condemned as cruel and inhumane by immigrant rights advocates and faith groups.

“We used to receive about 1000 migrants per day at our shelter [in McAllen, Texas], but now [during MPP] it is in the 10’s,” said Sr. Norma Pimentel, executive director of CCRGV. Instead, her organization has largely shifted its resources to providing aid to the migrants living in tent camps just across the border in Matamoros, Mexico.

Teresa Cavendish of the Casa Alitas migrant shelter in Tucson said that they are also receiving a fraction of the number of migrants they used to receive from Border Patrol or Customs and Border Protection custody after migrants are processed by U.S. authorities.

All four agencies have had to change their operations to manage and prevent COVID-19 infections within the populations they serve. Cavendish explained that Casa Alitas is now receiving migrants who are either released from detention centers or exempted from the MPP policy and allowed into the United States due to severe vulnerability to COVID-19.

Cavendish explained that, given conditions in the border towns and in detention and processing centers, it is reasonable to assume that every migrant has been exposed to COVID-19. There are high infection rates among migrants processed in U.S. government centers. Casa Alitas offers quarantine and isolation space for these individuals upon arrival.

Similarly, Sr. Pimentel and CCRGV have been helping coordinate the isolation of migrants in motels, as well as sanitation and testing in camps in Mexico. These efforts have in part been funded through the CARES Act, the first pandemic relief package. Sr. Pimentel expressed the need for more government funding.

Looking ahead, the agencies are expecting their resources to be strained as MPP is lifted, pandemic-related border restrictions are eased, and as the Biden administration seeks to fulfil its promise to adopt more humane border enforcement policy. While MPP has been in place, the capacity of border agencies has been greatly reduced. Cavendish explained that before MPP, there were about 30 migrant shelters along the border, with high capacity. Now, there are about 10, with much lower capacity, especially with COVID-19 precautions in place.

Despite these challenges, the leaders expressed hope that, with coordinated effort and support, they could meet the challenges. “We need to have confidence in resilient border communities to respond to the needs presented,” said Dylan Corbett of Hope Border Institute in El Paso. “We cannot allow complexity…to be an excuse for inaction.”

Corbett stressed the difficulties ahead, including the longer-term challenge of reforming the broken border enforcement and immigration systems, which he described as motivated by racism and xenophobia, and the anticipated increase in the flow of migrants, due to eased border restrictions and the fallout from the recent hurricanes and economic crisis in Central America. However, the agencies are already beginning to plan their response, holding monthly meetings and asking for support from their allies around the country, as well as from the U.S. government.

During previous crises, including the family separation crisis in summer 2018, faith-based organizations created what Corbett called “highways of charity and justice” throughout the United States to allow for the flow of funds, aid, and migrants themselves to and from places where help was available or needed.

Reflecting on that experience and anticipating the coming months, Corbett remarked, “We’re going to need Catholic partners around the country to step up in unprecedented ways.”