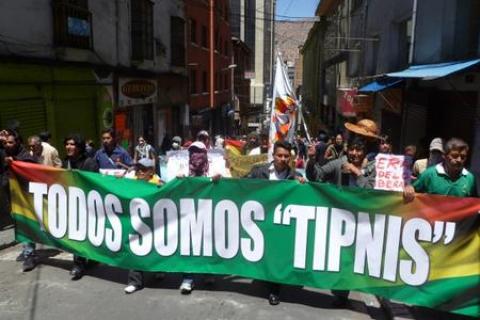 The Bolivian government of Evo Morales that identifies itself as indigenous and defender of the Mother Earth, continues in conflict with indigenous peoples who live in the Isiboro Sécure National Park and Indigenous Territory (Territorio Indígena y Parque Nacional Isiboro Sécure, TIPNIS), an area of rich biodiversity between the states of Cochabamba and the Beni. The conflict revolves around the government’s decision to build a highway joining the two states that would cut through the middle of the TIPNIS.

Since early this year the conflict has been the focus of national attention when the government announced a contract to build the highway in three stages. The problematic part of the construction would be the second phase of the highway that would pass directly through the middle of the 3,860 square mile indigenous territory and national park. Immediately after the announcement the indigenous leaders of the territory initiated broad protests; the government was acting contrary to the rights of the indigenous people guaranteed in the new constitution and international agreements signed by Bolivia that before any major construction such as a road is initiated in indigenous territories the indigenous of that territory are to be consulted. In the case of TIPNIS the government signed a contract to build the road without making this consultation.

After many months of resistance the major groups of indigenous peoples in the TIPNIS forced the government to pass a temporary law that blocks the building of the road through the park. The government then launched a consultation of the territory’s communities, relying on the support of some communities who have accommodated to the new arrivals of coca growers near the territory’s southern area who favor the construction of the road. This consultation has been resisted by the majority groups to the extent of blocking the brigades of the Election Tribunal from reaching a number of the tribal communities.

The government announced that as of early October, 49 of the 69 communities in the park have been consulted and that the majority back the construction of the road. Since the contract with a major Brazilian construction company to build all three phases of the road was cancelled some months ago, the government has now contracted a Bolivian company to continue work on the first phase. On October 8, President Morales stated that since 47 (sic) communities have been consulted and agree with the construction of the road, there is no need to continue consulting the other communities. He repeated the recurring government position that the resistance of some communities is influenced by certain foreign non-government organizations and self-interested indigenous leaders.

The president of the Sub Central of TIPNIS, Fernando Vargas, stated that of the 22 communities affiliated to his organization, 15 have not been consulted. Further, in one community, Puerto San Lorenzo, the Electoral Tribunal brigade reported that it had interviewed two families, yet the government reported that all the families of the community were in agreement with constructing the road. In another instance the brigades consulted a community, Santa Rosa, but that this community should not be consulted because it does not belong to the Community Land of Original Peoples (TCO) within the TIPNIS, and that the same holds for another community, Limo, which is private property and not community land.

A further complication to this on-going conflict is the government’s promulgation on October 15 of a new law on land, the Law of the Mother Earth and Integral Development for Living Well. While the new law aims to eliminate large haciendas and gives preference in distribution to appropriated lands to women, indigenous peoples and Afrobolivians, it also permits the exploitation of natural resources in whatever zone of the country they are found while respecting the environment.

At the ceremony promulgating the new law, Vice President Alvaro Garcia said, "[M]uch of the conflict with the TIPNIS Park is based upon a green capitalism which seeks to use Bolivians as guards of the forest in exchange for a little cash. …We are not going to be mere guards of the forest and live like we are living now for 1,000 years more." He continued, "[I]f we have to take a mineral from the ground, we have to take it without destroying the environment, but seeking a balance between satisfying basic necessities, production, and preserving the Mother Earth."

Yet major indigenous organizations such as la Confederación de Pueblos Indígenas de Bolivia (Cidob) and the Consejo de Ayllus y Markas del Qollasuyo (Conamaq) reject the new law because in their eyes it replaces a concept of ecological development in favor of Mother Earth with a more established concept of development camouflaged with the word integral.