Bolivia: End of the Evo era 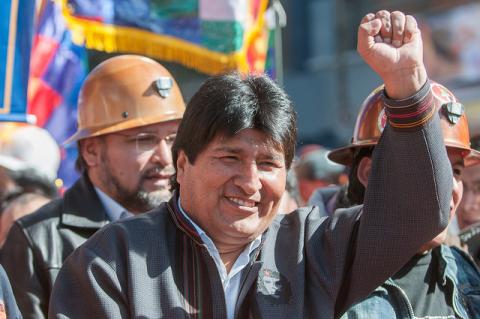 In February, voters in Bolivia rejected a ballot measure that would have allowed President Evo Morales to run for president for a third term. Maryknoll Fr. Gene Toland, director of the Maryknoll Center in Cochabamba, Bolivia, wrote the following reflection on this historic vote. The following article was published in the March-April 2016 issue of NewsNotes.

Embracing the end of an era, voters in Bolivia rejected a constitutional amendment that would have allowed President Evo Morales to run for a third term in 2019. The electoral commission ruled that voters rejected the proposal by 51 percent to 49 percent.

Before the vote, President Morales, Bolivia’s first indigenous president, repeatedly expressed that he had the strong support of social movements and rural people. During his ten years as president, he used more equitably distribution of natural gas revenues to reduce poverty levels and spurred the creation of an indigenous middle class. But he misjudged the feeling held by many voters that ten years is enough for any government, even if they are not strongly against the ruling party.

This vote was not the win of an opposition party or even a unified movement other than on this one issue of not changing the constitution to allow for a third presidential term in 2019. The opposition in Bolivia is, in the words of one commentator, an “abstraction.” It consists of multiple factions none of which have the national support of the official party. The motives for voting No were varied and reflected a wide divergence of political positions. The overall motive was to strengthen the institution of a democratic form of government.

While he says he accepts the results and looks forward to going back to the tropical area outside of Cochabamba to work his farm and play football (soccer), this defeat comes as a jolt to him and the Movement Toward Socialism (Movimiento al Socialismo; MAS) political party. Evo Morales became a sort of “brand name” for the party these past ten years. MAS party members now face the challenge of finding a candidate with the charism and name recognition of Morales.  The party has been vertical in its structure and intolerant of diversity of opinion. A series of capable people who began with the party ten years ago have left it in recent years.

Possible candidates for the presidency could include a disillusioned former member of MAS, or someone like Carlos Mesa, a respected journalist, who served a short time as president before Morales, or Luis “Lucho” Revilla, the current mayor of La Paz. But only the MAS party has the national scope to run a successful presidential campaign. It is doubtful that a more politically conservative candidate could win the presidency. The general feeling of Bolivian society is that the county will never return to the more conservative era that existed before Morales took office in 2006. For all the disagreement with this government the majority of Bolivians recognize that the country has advanced during Morales’ presidency, especially for the majority of indigenous citizens.

What does this referendum vote say about a government with the strong backing of social movements? I believe well-organized and focused social movements can run a country well, as long as they have the capacity to be a government for all, to compromise in the interest of the common good. They cannot be a kitchen cabinet outside of the government. Rather, they must work within the messy process called democracy. When President Morales took office in 2006, the MAS party was not prepared to govern like that and has paid the price of losing some of its most talented supporters. The MAS party now has four years to build on the good they have done and serve the long-term interests of the country, or flounder under the pressure of disagreement.

Photo: President Morales leads a march of the Central Obrera Boliviana, the largest union of Bolivia, in 2013. Photo: Flickr/Eneas de Troya and licensed in the creative commons 2.0.