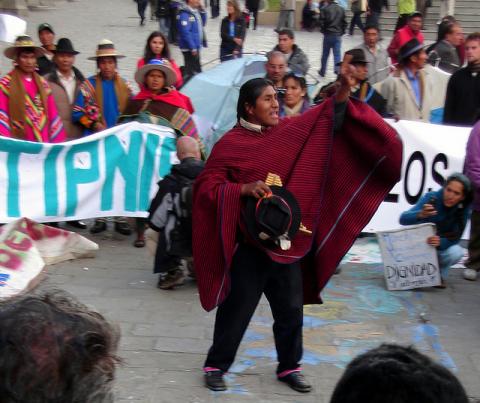 This article appears in the July-August 2015 NewsNotes.

In 2011 indigenous communities marched hundreds of miles to Bolivia’s capital, La Paz, to protest a government proposal to construct a highway through the Isiboro-Secure Indigenous Territory and National Park (TIPNIS in its Spanish acronym) (See related article in November-December 2011 NewsNotes). They were successful in postponing the project until the government held consultations with the 69 indigenous communities affected by the highway. The validity of the official results of these consultations, which indicated support for the project, has been questioned. The decision to go ahead with the TIPNIS highway and other projects represents a contradiction within the government of Evo Morales that advocates for a greener economy on the international stage while continuing to depend on environmentally destructive ventures nationally.

According to the government, 55 of the 69 communities consulted about the highway (80 percent) agreed to its construction, yet Bolivia’s human rights ombudsman, Rolando Villena, issued a report calling the consultations "authoritarian, colonialist and unilateral." Three communities opposed the project and 11 boycotted the consultation process altogether.

A 15-member commission representing the Catholic Church and the Permanent Assembly of Human Rights in Bolivia (APDHB) carried out a parallel consultation of 36 communities, reporting that 30 were against the highway. They found the official consultations to be neither free, nor prior, nor informed – the three requirements to be considered legitimate according to the International Labor Organization’s Convention 169, which Bolivia has officially adopted. While President Morales has said that the controversy over the highway ended with these consultations, it is clear that the struggle is far from over. To continue following the issue, Emily Achtenberg in the North American Congress on Latin America (NACLA) has a series of articles detailing the long, controversial process around the highway and will continue to cover the matter.

The controversial highway is not the only initiative that concerns indigenous communities and environmentalists. Two weeks before announcing his plan to go ahead with the highway, Morales issued Supreme Decree 2366, which opens up national parks, considered natural reserves in the Bolivian Constitution, for oil and gas exploration. This announcement confirms the fears of many that the highway is not planned only to help stimulate economic development in the area, but also to facilitate the extraction of fossil fuels from the area. Indeed, since first elected in 2005, Morales has expanded the amount of land conceded to oil and gas exploration from 7.2 million acres to 59.3 million. Until this decree, exploration in national parks had been impossible. A rapid increase in drilling and mining in these reserves is expected.

The decree requires one percent of money invested in extraction projects to be used for local development projects and that projects in "fragile ecosystems" to use advanced technologies to minimize environmental impact and carry out independent environmental impact assessments (EIAs). But according to environmentalist Teresa Flores, these requirements are misleading because the government has made the EIAs into mere formalities and the agency responsible for evaluating the assessments has "no independence and does what the government wants." According to government data, 11 of 22 protected areas are already overlapped by oil and gas concessions. In addition, according to Jorge Campanini from Bolivia’s Documentation and Information Centre (CEDIB), the new law allows companies to change the way protected lands are zoned. "The discovery of a potential commercially-viable deposit within a Protected Area means that the company can demand that SERNAP [National Service for Protected Areas] reconfigures the park… The Protected Area and its [land-use] zonification would be re-drawn according to oil exploitation criteria rather than the criteria of conservation and protection."

Another significant threat to Bolivian forests comes from an ambitious goal announced last year by Vice President Alvaro Garcia Linera: by 2025 Bolivia aims to expand the amount of land dedicated to agriculture by 2.5 times (from 5.2 million hectares to 13 million) in order to triple food production to 45 million tons. Besides securing Bolivian food security, the vice president said the proposal would create one million jobs and bring in needed foreign currency through the export of up to 24 million tons of food.

A concern with this goal, according to Dr. Robert Müller, a biologist from the Institute of Geography at the German Georg-August-Universität who has been working in Bolivia since 2000, is that "[n]o land without forest is available anymore… Clearing one million hectares per year would increase the deforestation rate - which is among the highest in the world already - by a factor of four or five."

The plan will also result in substantial increases in Bolivia’s greenhouse gas emissions, the same emissions that President Morales urges the global community to reduce rapidly in order to avoid the worst of climate change. According to a study by Friends of Nature, 77 percent of Bolivia’s carbon emissions already come from the conversion of forests into agricultural land.

Vice President Garcia Linera explained the contradiction between Bolivia’s strong ecological stance in international forums and their destructive national policies in an essay titled "Geopolitics of the Amazon" saying that the priority of the government is "overcoming capitalism as a mode of production, [whether] in its extractivist or non-extractivist variant." Additionally, referring to the principle of differential responsibilities he says that high-carbon countries in the global North will more effectively address climate change.