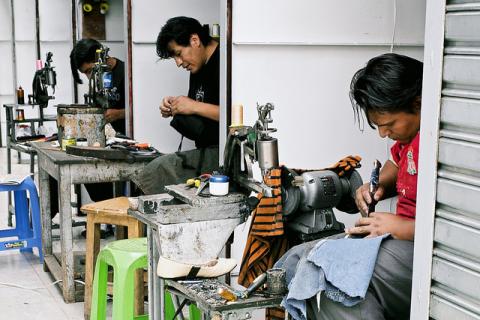 The Bolivian bishops issued a pastoral letter on drug trafficking and drug addiction in Bolivia. The following article was published in the May-June 2016 issue of NewsNotes.

On April 7, the Bolivian bishops’ conference released a pastoral letter, “Today I put before you life or death,” that addresses concerns about both drug trafficking and drug addiction. (Available in Spanish at http://bit.ly/BoliviaBishopsdrugtrade.) The letter strongly critiques what the bishops perceive to be an inadequate response by the government on these issues. It names the complicity of state structures and public security officials in corruption and trafficking. The bishops call for President Evo Morales to join the Church in dialogue on these concerns.

According to Maryknoll Father Steve Judd, far from opening a dialogue, the Morales administration has shot back, accusing the bishops of meddling in politics and daring them to name those they accuse of complicity. Other officials and ministers followed suit and accused the Church leaders of being out of touch with the Bolivian people and indigenous culture, even though the letter affirms the value and use of coca in Andean indigenous culture. The bishops stood their ground, defending their right to make such a pronouncement on the basis of Catholic social teaching.

Tensions have been simmering between the Church and the Morales administration for some time. This statement and the government’s reaction should also be seen in light of the February 27 failed referendum to allow Morales to run for a third term. He still has four years left in his second term.

The failed referendum emerged as another source of tension between Morales and the Church. On April 5, Morales awarded two outstanding and highly respected Jesuit leaders the country's highest honor, the Condor of the Andes, “in recognition of their commitment and support in the preservation of aboriginals’ rights.” One of them, Xavier Albo, has a long and well-earned reputation as a voice and advocate for Bolivia's indigenous peoples. At the highly publicized ceremony, Albo called for Morales to step aside and enable an early election of a new president. This caught everyone by surprise as people like Albo have been long time friendly critics of the president’s administration.

There is indeed proof of government complicity in drug trafficking. The Vice Minister of the Social Defense and Controlled Substances Agency only recently admitted that there are Brazilian, Colombian, and Mexican cartels operating in the country. Former drug czar, Renee Sanabria, is serving a 15-year prison sentence after being extradited to the U.S. for cocaine smuggling. Sanabria previously accused the Morales Administration of actively inhibiting investigations of corruption. Other police and government officials have convicted of trafficking drugs and are noted in the letter’s footnotes.

The Morales administration has made some efforts to address narcotrafficking, which the bishops acknowledged. Morales initiated the “social control” program in 2010 to reduce the overabundance in coca crops to what is needed for traditional coca use. This has reduced violence but has not been evenly enforced in the two coca growing areas of the country. President Morales was previously a leader in the coca growing union.

The statement is a powerful moral critique of the drugs issue in Bolivia, but there are shortcomings. The statement lacks a historical context on the economic factors that drive people into drug trafficking, such as the crash of the tin market, which led miners and their families to migrate to the tropical Chapare region to cultivate coca; and the implementation of World Bank structural adjustment policies (SAPs) in 1985 that privatized some industries and led to job losses. Many people entered the informal economy, which includes the illicit drug trade.

The people who are largely punished are not the corrupt officials or large scale traffickers, but rather the small scale traffickers – often mothers trying to feed their families, many of whom are indigenous. The statement fails to recognize this reality or show mercy toward the small traffickers who are economic victims, rather than  criminals in need of punishment. The bishops do distinguish between small and large scale traffickers and say the punishment should fit the crime. But they do not raise the need for governmental initiatives to spur the creation of more viable economic alternatives outside of growing alternative crops that do very little for the livelihoods of non-farming communities.

The bishops also give little attention to the failure of past governments to address  economic challenges, or the large prison population that grew as a result of the U.S.–influenced 1988 anti-drug law, 1008, or the influence of high international demand for cocaine.

The bishops do show great mercy for drug addicts, saying they need pastoral and human resources and treatment, not jail time. They call traffickers merchants of death. They also promote prisoner rehabilitation and integration back into society after they have served their time. In significant ways, this landmark letter from the bishops of Bolivia does address the drug crisis from a compassionate and pastoral charism.

Photo: Cobblers in Cochabamba, Bolivia. Photo by Flickr/Rocco Lucia and licensed in the creative commons 2.0.