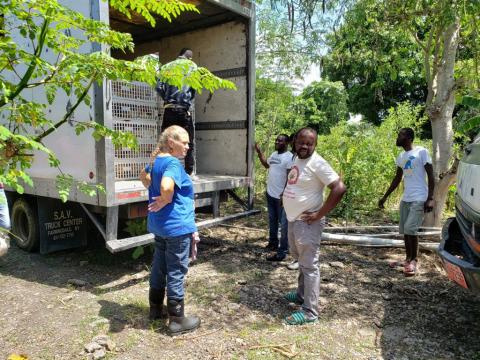 An office within the Haitian Bishops conference has commented on the emerging crisis in Haiti. This article appeared in the November-December 2019 issue of NewsNotes.

The political and economic situation in Haiti has deteriorated into a crisis, with increasing gas, food, and transportation shortages and frequent civilian protests calling for the president, Jovenel Moïse, to step down.

Several Catholic news sources have reported on statements by the Haitian Bishops conference condemning the widespread corruption and economic collapse in the country. According to Crux Now and the Catholic Register in Canada, the justice and peace commission of the Haitian Bishops’ conference wrote in an open letter, “Our country is shamefully trapped in corruption at the highest level of society. Unabated corruption has become an endemic evil… [which] seriously undermines, both from an ethical and economic point of view, the development of our country.”

The justice and peace commission described the situation: “[Haitians are] unemployed people in a place where there are no jobs, or exploited without access to a fair wage, a people who lack the means to pay for the education of their children, a people without access to health care because of high costs…The people get no justice…” The commission ultimately stated that “a change in head of state is crucial as is a change in the way the authorities govern the country.”

Maryknoll Affiliate Renate Schneider, a longtime resident of Haiti, has also written about the deteriorating conditions in the country: “We had a medical delegation of surgeons coming…and had to cancel, because there is no gas, no oxygen, and no nitrous oxide for anesthesia…everywhere you look, people are suffering. Stores [in my town] are empty, because goods are not coming from Port au Prince…I have never seen anything like it. Even when [former president] Aristide fell it was not like this.”

Maryknoll Lay Missioner Sami Scott  is in Haiti working on a project to stimulate the local economy in the town of Gros Morne, despite the economic collapse. With the Religious of Jesus and Mary community, she has helped bring 1,000 hens to the town, which provide employment and a steady supply of food for the community.

Faith in action: Read about the bishops’ commission statement. Read a blog post about conditions in Haiti by Renate Schneider.  Read about the work of Maryknoll Missioner Sami Scott in Haiti.