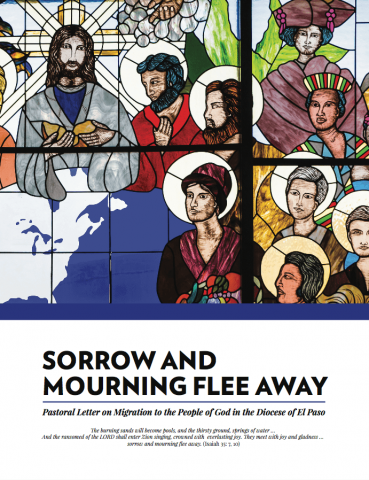 On July 18, just steps from the U.S.-Mexico border, Bishop Mark J. Seitz of El Paso, Texas, issued a new pastoral letter on the issue of immigration, calling for a moratorium on deportations by the United States until it adopts comprehensive immigration reform.The following article was published in the September-October 2017 issue of NewsNotes.

In the first pastoral letter on immigration by a U.S. bishop in a decade, Bishop Mark J. Seitz of El Paso, denounces “narratives that paint our border as a place of chaos, and violence” and calls for a moratorium on deportations until the U.S. adopts comprehensive immigration reform. During a press conference at the 125-year old Sacred Heart Catholic Church in Segundo Barrio, Bishop Seitz blessed the crowd – which included fellow clergy, civic leaders, and a mariachi band – in both English and Spanish, before signing copies of his letter entitled “Sorrow and Mourning Flee Away.”

In his letter, Bishop Seitz denounces the suffering caused by a “broken immigration system” and sets migrants and his community as the heroes in an increasingly complicated story. “Migrants are prophetic in their lived testimony to values increasingly sidelined in today’s culture: faith, life, and family. And they wake us from our indifference, opening our eyes to the injustices of globalization and ‘an economy of exclusion and inequality,’” he writes, citing Pope Benedict XVI.

But “migrant communities are living in a great deal of fear right now,” Bishop Seitz said in a slow, deliberate voice from the pulpit at Sacred Heart. They are “brothers and sisters who need to need to know they are not alone.”

Following Pope Francis’ lead, Bishop Seitz challenges the increasingly harsh rhetoric against migrants and condemns the escalating enforcement of U.S. immigration laws. Measures such as mass deportations and border walls are not going to make the situation better, he said. “It’s going to have a disastrous impact on our migrant community and, finally, on all of us.”

Bishop Seitz called the letter and its proposals a “process” and “not a shot across the bow.” Among his promised actions are the creation of a diocesan commission on migration and a scholarship fund for so-called ‘DREAMers’ – “the most innocent of the innocent” – who will lose their protected status if President Trump follows through on his campaign promise to end the Deferred Action for Childhood Arrivals (DACA) program. It also sets up a formation program for clergy to train in ‘know-your-rights’ rules and rapid response teams for “when they are at the door,” and calls for “permanent, comprehensive immigration reform” and an immediate moratorium on deportations of all nonviolent migrants.

With this pastoral letter, Bishop Seitz supports a level of local Church resistance perhaps not seen since the Sanctuary movement in the 1980s, and instructs local Church leaders to refuse immigration officials entry into parishes, schools, or other Church property without a federal warrant or life-threatening emergency. “We will recognize the rights we have and exercise them,” he said during a video-streamed media conference after the letter’s release.

Bishop Seitz also calls on “[t]hose who administer our nation’s immigration laws and face difficult and sometimes dangerous situations. I appeal to you, do not ignore the obligations of conscience! Treat all you encounter with dignity and respect and with the American values of fairness and justice.” “No human being is illegal!” he declares, imploring immigration officers to respect the sanctity of sensitive places such as places of worship, hospitals, and schools, trusting their “goodwill” to do so.

Above all else, Bishop Seitz shines a compassionate light on migrants while offering a powerful appraisal of the “broken” system that hounds them. “I invite you to consider the challenges of a system which is breaking apart our community and reflect upon how God is asking us to respond,” he writes. “No one can deny the terrible human impacts of a system that divides families, permits some to detain human beings for profit, and compromises our nation’s historic commitment to the refugee and the asylum seeker. The burning sands of our desert are an unmarked grave for too many migrants who have died attempting to cross. Increased militarization of the border will make this journey even more dangerous.”

Bishop Seitz points to elected leaders who “have not yet mustered the moral courage to enact permanent, comprehensive immigration reform.” Seitz continues with a raw assessment of Congress and others who block reform: “We must also beware of the Pharisees of our day, who self-righteously hold others to a standard they would never apply to themselves. They attempt to enforce minutiae of the law meanwhile ignoring the unbearable burdens they are laying on children and families.”

“We fix our broken system,” Bishop Seitz writes, “the day we stop seeing [migrants] with fear and stony hearts.”

Faith in action: Read and share the pastoral letter at http://www.bordermigrant.org/