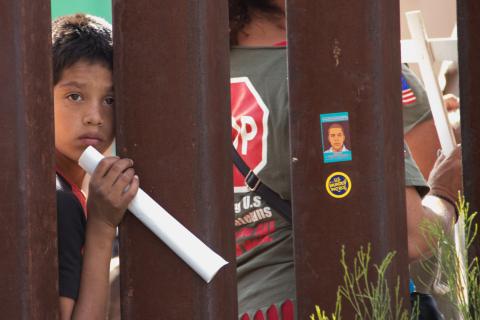 Since coming into office on January 20, President Biden has taken significant steps to enact his policy agenda on immigration. This article was published in the March-April 2021 issue of NewsNotes.

In his first weeks in office, President Joe Biden has taken quick action on immigration: rescinding the Muslim travel ban, strengthening protections for DACA recipients, dramatically raising the ceiling for refugee admissions, and taking first steps to reform the U.S. asylum system. These actions have been generally lauded by immigrants and advocates, but some worry reforms are not happening fast enough to address the suffering facing immigrants, especially at the border.

Some of President Biden’s first actions have focused on addressing border policy. To the relief of many, he quickly rescinded the zero tolerance policies enacted in 2018 by President Trump that resulted in the separation of approximately 5000 immigrant children from their parents. He followed this by issuing an executive order to initiate a taskforce focused on reuniting the approximately 600 remaining separated children with their parents.

The president also began to tackle the challenge of the infamous Migrant Protection Protocol (MPP) policy, also known as “Remain in Mexico,” which since 2018 has forced migrants and asylum seekers to wait in dangerous conditions on the Mexico side of the border while their cases are being processed in the United States. The large number of migrants still waiting in Mexico for processing poses a great logistical challenge to the new Administration.

On January 26, President Biden ended new enrollments to MPP, and on February 12 the Administration announced that it would start admitting and processing small numbers of migrants who have been waiting in Mexico under the program, with the idea that numbers will ramp up as processing capacity increases.
This move was welcomed warmly by Catholic immigrant social service agencies along the border. “It gives us immense hope that President Biden has announced to begin processing asylum seekers with open MPP cases, something that should happen swiftly because the wait has already taken its toll,” the Kino Border Initiative (KBI) in Nogales, Arizona tweeted.

A week earlier, KBI joined a handful of other Catholic service organizations and Catholic bishops representing the border region in sending a letter to the Biden administration expressing their hopes for immigration reform and immediate steps to address the systemic problems at the border, including through quickly ending MPP.

Catholic immigration agencies at the border stated that they will cooperate closely with the government to receive migrants as they are allowed into the United States. Ruben Garcia, director of Annunciation House in El Paso, announced that his organization will help provide hospitality for MPP releases in El Paso, about 25 per day at first. The U.S. government has pledged to work with non-governmental organizations to identify the most vulnerable migrants waiting in Mexico and allow them to enter the United States first.

UNHCR, the UN refugee agency, and the International Organization for Migration (IOM) will help with registering and testing migrants for COVID-19 before entry. About 8,600 migrants have been registered so far. “The process is very well organized and thought out,” said Melissa Lopez, director of Diocesan Migration and Refugee services  in El Paso, in a press conference on Feb. 25.

While the MPP program is winding down, advocates along the border as well as 60 Members of Congress are also calling for an immediate end to Title 42, a Center for Disease Control health order that allows immigration officials to rapidly deport migrants who cross the border during the national health crisis. Dylan Corbett, director of the Hope Border Institute, tweeted that even while the MPP or “Remain in Mexico” program is ended, “At a certain point, Title 42 will become Remain in Mexico by another name,” given the number of expulsions to Mexico which continue to occur under this policy.

The Biden administration has signaled that much more is to come regarding its agenda to enact broad immigration reform. President Biden sent an ambitious bill to Congress on January 20, the U.S. Citizenship Act of 2021, that, among other things, aims to provide an earned path to citizenship for all 11 million undocumented U.S. residents, reinvigorate the asylum system, prioritize family-based immigration, and reform border enforcement.

While some are pushing for the Administration to move faster, overall advocates are expressing relief and hope with the new Administration. Maryknoll Sisters Pat Edmiston and Ann Hayden, who work with immigrants at the U.S.-Mexico border, commented, “Under the Biden administration we expect that asylum seekers will be treated with dignity and respect... We are filled with hope, and continued prayer, for those who wait to hold their children again and for those who wait for safety on our doorstep.” §

Faith in action: To address a root cause of migration, contact your Senator to Co-sponsor the Honduras Human Rights and Anti-Corruption Act of 2021:
http://bit.ly/2ZTnsUZ