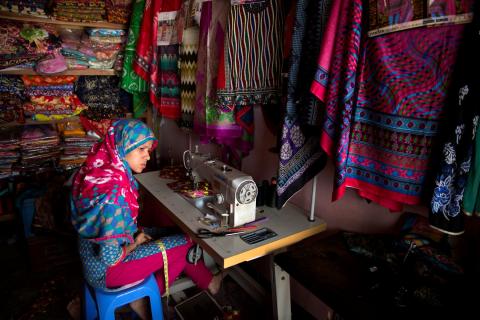 Eight years after 112 died in a fire at a garment factory, survivors stage protest calling for help from the prime minister. UCANews published this article, excerpted here, on November 25, 2020. This article was published in the January-February 2021 issue of NewsNotes.

Dozens of former workers and survivors of a deadly 2012 fire at a garment factory marched on the streets of Bangladeshi capital Dhaka to demand justice and compensation on the eighth anniversary of the tragedy.

Some 45 survivors of the Tazreen Fashions factory fire that killed 112 workers and injured hundreds participated in what they called a “walking dead march” from the National Press Club to Gono Bhaban, the official residence of Prime Minister Sheikh Hasina, on Nov. 24.

The workers sought the PM’s intervention to fulfill their demands and end their suffering. As they were blocked by police, most lay down on the street in a protest that created an emotional scene in the presence of dozens of media workers, rights activists and onlookers.

For the past 68 days, the workers have been staging an indefinite sit-in protest in front of the National Press Club for demands including justice, compensation and rehabilitation of Tazreen fire victims. They say that in the absence of support and compensation their misery and suffering have been unbounded.

Rehana Akter told reporters with tearful eyes how four of her family members perished in the fire and she jumped from the high-rise building to save her life, badly injuring her legs.

Razia Begum said she hurt her backbone and a leg as she too jumped off the building to escape the blaze. She is among workers who received no compensation from the government and Bangladesh Garment Manufacturers and Exporters Association (BGMEA), the main trade body.

The eight-story Tazreen factory in the Savar suburb of Dhaka employed more than 1,000 workers when it caught fire on Nov. 24, 2012. It supplied clothes for major Western retailers including H&M, Gap, Walmart and C&A.

As the fire engulfed the building, the fire alarm sounded. However, factory managers allegedly told workers to continue working. Panicked workers trying to escape found themselves trapped on smoke-filled staircases and behind locked doors.

Some bodies were burned beyond recognition and authorities buried them in a Dhaka graveyard after preserving their DNA samples.

In February 2014, the couple was sent to jail after they surrendered to a Dhaka court to seek bail, which was rejected.

The cases made no headway in the ensuing years as the prosecution failed to produce enough witnesses to prove crimes and all the accused, including Hossain and his wife, are now out on bail.

Father Albert T. Rozario, member of the Catholic bishops’ Justice and Peace Commission, called for immediate support for Tazreen fire victims and a proper trial of those accused of negligence.

“Positive changes have taken place in the garment industry since the Tazreen fire, but it is unacceptable to see workers continue to take to the streets for justice and compensation after eight years. I believe the government will look into their plight and pay heed to their call for help,” said Father Rozario, parish priest of St. Joseph Church in Savar.

Following the tragedy, Catholic charity Caritas lent support for the treatment and rehabilitation of 104 Tazreen victims in collaboration with several Western retailers and the BGMEA.

Bangladesh’s US$25 billion garment industry is the world's second largest after China’s thanks to investments and cheap labor. It employs more than 4 million workers, mostly poor rural women who stitch clothes for high-street Western brands with a low minimum monthly wage of 8,000 taka ($95).

Despite being a lifeline for the country's economy and accounting for 80 percent of annual foreign exchange income, the industry has been plagued by poor labor practices and hazardous working conditions for years.

More than 2,000 workers have died in deadly fire and building collapses in the past decades, data from the Fire Services Department shows.

The Tazreen fire came barely six months before an even worse tragedy, the Rana Plaza collapse on April 24, 2013, that left 1,134 workers dead and thousands injured in what was one of the world’s worst industrial disasters.

Following the Tazreen and Rana Plaza tragedies, Western retailers, under huge pressure from consumers, labor groups and governments, invested in long overdue structural and safety reforms in some 4,500 garment factories in Bangladesh, making the industry relatively safer for workers.

Photo of a survivor of the Rana Plaza fire by ILO Asia-Pacific, available on Flickr. Creative Commons 2.0.