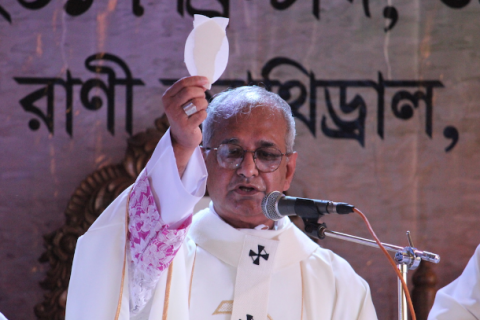 Bangladesh has experienced severe flooding, storms, and loss during the COVID-19 crisis.The following article was published in the September-October 2020 issue of NewsNotes.

Severe flooding has struck Bangladesh again, submerging at least a quarter of the country under water, taking lives, and washing away livelihoods. In addition, in a major blow to the Church in Bangladesh, Archbishop Moses Costa of Chittagong, a beloved figure, died of COVID-19 on July 13.

According to the National Catholic Reporter, Archbishop Costa, age 69 and the secretary-general of the Catholic Bishops' Conference of Bangladesh, was a leader in the Church who, in the spirit of Pope Francis, modeled mercy and compassion and spoke out about systemic injustice and poverty. He was a friend of Maryknoll Father William McIntire who serves on mission in Bangladesh. The archdiocese of Chittagong called the archbishop’s death an “an irrevocable loss for all of us.”

Despite these challenges, Father McIntire says hope remains. “The ‘good news’ here is that we are ‘holding our own’ and seemingly ‘bending the curve’ both as regard the pandemic and the flooding,” he writes. “During these 40 years [on mission here] in Bangladesh, I have found our people to be amazingly resilient, and that continues to be true now.”

This severe flooding is only the latest in a pattern of increasingly severe and frequent river flooding and storms in Bangladesh, thought to be the result of climate change and sea level rise. Just two months ago, a cyclone decimated the county’s southwest region.

These effects of climate change are felt most by the poorest in Bangladesh, and they are one major factor preventing the country from developing economically: the repeated devastation of infrastructure and livelihoods by storms and flooding.

In order to mitigate this cycle, the UN is trying to fund an “anticipatory humanitarian action” project in Bangladesh that would provide cash assistance to vulnerable families before crises hit, so that they have the time and resources to move to safer areas, reinforce their homes, or invest in preparatory supplies. The Independent, a British online newspaper, reports that this kind of humanitarian model is becoming increasingly attractive and important in light of increasing vulnerability to climate change and compounding crises, such as the pandemic.

The data on COVID-19 in Bangladesh indicate that the country could be inching toward recovery. National lockdowns were implemented that appear to have helped in keeping the disease contained. While the test positivity rate remains just under 20 percent, the number of active infections is decreasing, and the health minister, Zahid Maleque, remarked in the Daily Star newspaper on August 14 that “the severity of the Covid-19 outbreak is decreasing.”

Reflecting on these tough times in light of 40 years of mission in Bangladesh, Fr. McIntire remarked, “Our courageous and resilient Bangladeshi people seem to overcome all the odds and not just survive but also make substantial progress after the seeming disaster. God bless them all!”

Faith in action: Watch the recording of a 30-minute webinar on climate change, U.S. climate policy, and the upcoming U.S. elections. The webinar is part of our 2020 elections project, Faithful Voting and Global Concerns. http://bit.ly/MOGCYoutube