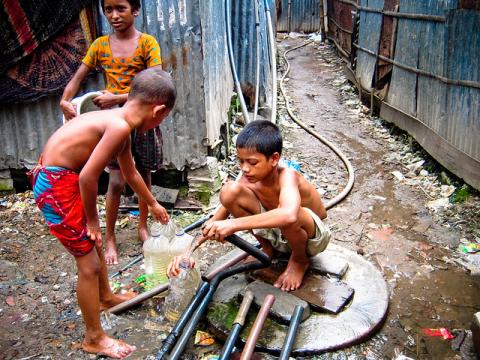 The following is an excerpt from an article published by the Union of Catholic Asian News (UCAN) on December 7, and reprinted in the January-February 2016 issue of NewsNotes, about a new report by the Asian Development Bank on the impact of climate change on poor communities.

A recently released Asian Development Bank (ADB) study, “Global Increase in Climate-Related Disasters,” revealed that climate-related disasters are linked not only to people’s increased exposure and vulnerability, but also to changes in temperature and rainfall resulting from rising greenhouse gases.

“Policymakers and economic advisors have long held the view that climate action is a drain on economic growth,” notes Vinod Thomas, coauthor of the study and director-general of Independent Evaluation at ADB.

“But the reality is the opposite: the vast damage from climate-related disasters is an increasing obstacle to economic growth and wellbeing.”

A statement released by ADB on November 27 emphasizes “three implications” inherent in the findings of the study.

First, climate impacts are not just concerns for the distant future, but are already being felt.

Second, all countries are experiencing damage caused by climate-related disasters — rich and poor. However death tolls are especially high among poor people who are more likely to live in harm’s way, such as in flood-prone areas.

Thirdly, it is a mistake to think that climate action — such as switching from fossil fuels to cleaner renewable sources — will hold back economic growth.

The study also found that the frequency of intense climate-related disasters over the past four decades is associated with population exposure, measured by population density and with people’s vulnerability to these events, measured by their income levels.

“The evidence is telling us that hazards of nature are increasingly turning into disasters because of human action,” says Ramon Lopez coauthor of the study and professor of economics at the University of Chile.

“We found that disasters are exacerbated by climatic impacts at the local level as well as by climate change globally.”

Disaster risk estimates in the study illustrate some potentially big impacts. For a country facing the average of nearly one climate-related disaster a year, if carbon dioxide concentrations continue to rise by the current annual rate of 2 parts per million (or by 0.5 percent) from the already high 400 parts per million, that would see a doubling of the frequency of floods and storms in 17 years.

The three countries the study reviewed at high risk of climate-related disasters, Indonesia, the Philippines, and Thailand have on average seven of these episodes a year.

Any further increases in CO2 would hit these countries hard, as would be the case for other disaster-prone countries such as Bangladesh.

“The implication is that a big part of the actions for disaster risk reduction will have to be preventive in nature, in addition to those that are reactive, such as relief and rebuilding efforts,” says Lopez.

“The relationship between climate change and the frequency of intense natural disasters provides an immediate and tangible reason why actions by countries and the global community must be urgent and decisive,” says Thomas.

The first half of this decade featured deadly climate-related disasters, among them floods in Thailand in 2011 and Typhoon Haiyan in the Philippines in 2013.

The year 2014 was the Earth’s warmest since records began, and 2015 could turn out to be hotter. While scientists hesitate to link any one of these occurrences to climate change, the association is compelling.

To read the article in its entirety, go to http://www.ucanews.com/news/displaced-poor-bear-brunt-of-climate-change/....