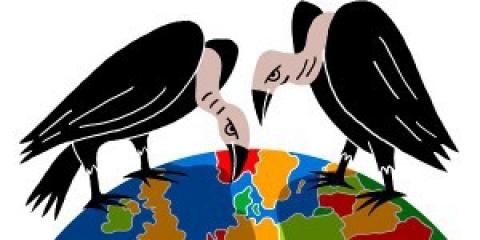 The U.S. Supreme Court’s decision not to hear the Argentine government’s appeal in its case against hedge funds leaves that country in a very difficult situation, much like when the country defaulted on $81 billion of debt in 2001 (see "Debt trial of the century," September-October 2013 NewsNotes for background on the case). Many are watching closely to see how Argentina will react to the decision. The following article was published in the July-August 2014 NewsNotes.

The lower court’s ruling requires Argentina to pay "holdout" creditors (popularly called vulture funds) $1.3 billion, which would give them a 1,380 percent aggregate return to their investments. (They were not satisfied with Argentina’s offer of a 148 percent return.) If Argentina pays the full amount required, it is likely that other creditors who had previously renegotiated with Argentina for much lower payments will demand a payout similar to what the vulture funds receive. This would require more than $15 billion immediately (half of Argentina’s international reserves) and $120 billion over time, which would likely lead to another default.

(Wikipedia defines vulture funds as private equity or hedge funds that invest in debt considered to be very weak or in imminent default. "Investors in the fund profit by buying this debt at a discounted price on a secondary market and then suing the debtor for a larger amount than the purchasing price. Debtors can include companies, countries or individuals … strategically profiting off of debtors that are in financial distress.")

In pushing its case, Argentina had a wide range of international support, from the U.S., Brazilian, French and Mexican governments, to the World Bank and the American Bankers Association. These supporters submitted letters to the Court urging it to hear the case due to concerns that the lower court’s decision could wreak havoc in the global economy. In its letter, the U.S. government wrote, "[T]he district court’s interpretation… could enable a single creditor to thwart the implementation of an internationally supported restructuring plan, and thereby undermine the decades of effort the United States has expended to encourage a system of cooperative resolution of sovereign debt crises."

The decision is especially troublesome because in the 13 years since the default, the Argentine economy was able to rebound impressively from its crisis. Despite warnings from many economists that a default would worsen the economy, it was only three months after declaring default that the economy began a long and impressive recovery. After 10 years GDP had grown by 94 percent in real terms, the highest growth rate in the Western hemisphere. Argentina was also able to greatly improve social indicators with unemployment as well as poverty and inequality rates plummeting.

Mark Weisbrot with the Center for Economic Policy Research points out that "Argentina’s experience also calls into question the popular myth that recessions caused by financial crises must involve a slow and painful recovery. Argentina’s financial crisis and collapse were as severe as that of almost any country in recent decades, and yet it took only one quarter after the default to embark on a rapid and sustained recovery."

In addition to the lawsuit, vulture funds are pursuing other means to pry the money from Argentina. One, Riverstone Group, has used its political influence in its hometown of Manchester, NH to have state senator Lou D’Alessandro present a bill allowing the state liquor board to halt the sale of Argentine wine until the debt is paid to Riverstone. Another fund tried to seize the Argentine president’s plane, Tango 01, while it was in the U.S. for maintenance. Another temporarily seized an Argentine ship and tried to seize parts of Argentina’s rocket program in order to be repaid.

Yet creditors need to be cautious about forcing countries into impossible debt situations. Germany was loaded down with such enormous debt after World War I that its economy crashed leading to the election of Adolf Hitler and his Socialist Nationalist party. Learning their lesson, allied forces worked out a much more manageable solution after World War II with the London Debt Agreement of 1953.

While individuals with too much debt have options like declaring bankruptcy - a solution that benefits not only debtors, but creditors and the larger economy as well - sovereign nations have no such option, which has led to decades of suffering for citizens of debtor nations. This case shows the desperate need for such an option and hopefully will help create momentum for creating such a mechanism. Surely it is more important for millions of Argentines to be able to avoid hunger and poverty than for hedge funds to receive exorbitant profits.