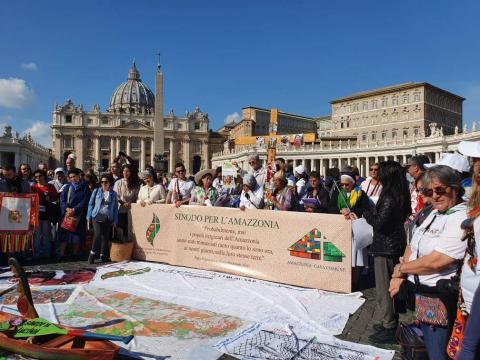 The Special Assembly of Bishops for the Pan-Amazonian Region took place in Rome in October on the theme, “Amazonia: new paths for the Church and for an integral ecology.” This article appeared in the November-December 2019 issue of NewsNotes.

The Synod on the Amazon concluded in Rome on October 27 after three weeks of meetings. The 185 voting members of the Synod released a 33-page final document that calls for the Church to see and act in new ways and to be an “ally” of the peoples of the Amazon.

“The hopeful energy in Rome during the Synod on the Amazon was extremely high,” said Susan Gunn, Director of the Maryknoll Office for Global Concerns. “Like the participants in the Synod, Maryknoll missioners, through their lived experiences, are acutely aware of the wisdom indigenous cultures have to offer and the exploitation and suffering these communities experience to satisfy the consumption demands of the Global North. We live in a world out of balance and headed toward self-destruction – unless we change course now.”

The final document’s main proposals to Pope Francis include: allow for the priestly ordination of married men in the region to address a lack of sacramental ministry, reopen the study commission on ordination of women as deacons, adopt a definition of ecological sin as “a sin against future generations that manifest itself in acts and habits of pollution and destruction of the environmental harmony,” and divest the Church in the Amazon from extractive industries that cause socio-ecological harm to the earth and indigenous communities.

These proposals will be weighed by Pope Francis, among others. Speaking off the cuff to Synod participants, Pope Francis also promised to reconvene the commission to study the possibility of women deacons in the Church.

Faith in action: Learn more about the Synod on the Amazon and the final document at http://bit.ly/ResourcesSynod