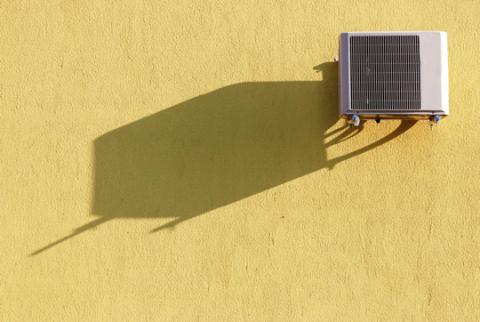 In Bill McKibben’s sobering article Global warming’s terrifying new math, published in July in Rolling Stone, readers learned about the brief the Chamber of Commerce filed with the Environmental Protection Agency urging officials not to regulate the release of carbon into the air. “‘[S]hould the world’s scientists turn out to be right and the planet heats up,’ the Chamber advised, ‘populations can acclimatize to warmer climates via a range of behavioral, physiological and technological adaptations.’” The following article was published in the September-October 2012 NewsNotes.

Unfortunately, one of the key technological responses probably imagined by the Chamber of Commerce – air conditioning – not only releases increasing amounts of climate change gases into the air, aggravating the problem, but is also making it more difficult for our bodies to adjust to a warmer world. Stan Cox, senior scientist at the Land Institute, provides the evidence in his article, “Air conditioning: The cold reality,” published in July by Al Jazeera:

“The greatest irony, of course, is that by chilling the indoor environment today, we are helping ensure that future summers will be even hotter. Air-conditioning’s massive energy demand is overwhelming efforts to reduce greenhouse gas emissions. Take the output from all of the United States’ renewable electricity sources combined, multiply it by five, and it still could not satisfy current air-conditioning demand, let alone serve other uses. The U.S. Department of Energy projects that wind, solar, geothermal, and biomass electricity generation will indeed expand almost fivefold, but not until 2030. By that year, if the department’s predictions hold, total electrical generation from all renewable sources will be sufficient to satisfy only 75 percent of air-conditioning demand. For everything else, there will be no green alternative.”

Due to a phenomenon called Jevons paradox – in which improved efficiency causes an increase in consumption of a resource – “[b]etter energy efficiency alone cannot reduce the weight of an air-conditioned society,” writes Cox. “U.S. home air-conditioning units in service today are an impressive 28 percent more efficient on average than they were in the mid-1990s. But we have taken full advantage of that cheaper comfort, and as a result, the number of kilowatt-hours of electricity used for cooling the average air-conditioned household actually increased by 37 percent over that same period. …”

This massive increase in cooling does not even have the positive effects that many imagine. “[T]here is a widespread belief among employers that their employees are like computer chips, operating most efficiently when kept as cool as possible. Research does indeed show that people work most productively when they’re not feeling excessively hot, but it also shows that the typical office’s too-cool conditions are a drag on productivity.”

“The standards that are followed in the cooling of most buildings do not account for the fact that the temperatures that we humans find comfortable don’t lie within a fixed range,” continues Cox. “Rather, our comfort range shifts up and down, and expands and contracts, depending on the indoor and outdoor temperatures we’ve experienced in recent days and weeks. This phenomenon, called the ‘adaptive model of comfort,’ explains why people who typically live and work in air-conditioned spaces have different comfort expectations from those who do not.

“Researchers in Brazil, the United States, and Europe have found that people who are employed in air-conditioned workplaces visit doctors and hospitals more frequently and generally have a higher risk of poor health than do those who work without air-conditioning.

“The range of research findings that favour increased flows of outdoor air is remarkable. Under natural ventilation, people have been found to experience fewer problems with headaches, colds, other respiratory ailments, circulation problems, eye dryness, allergies, and chest tightness. There is lower absenteeism when employees work near windows and can open them.

“Air-conditioning creates a need for more air-conditioning. Human-physiology studies show that life in the world of ‘coolth’ undermines our natural adaptation to heat and can disrupt endocrine functions. As we primates evolved in hot climates, nature equipped us with heat-adaptation mechanisms. Experiencing high temperatures, especially when we are also exerting ourselves, builds up tolerance to heat, and we are able to function and work for longer periods under higher temperatures. Without such heat adaptation, our bodies are far more susceptible to heat.

“When faced with the spring and summer onslaught of pollen, dust, and other allergens, millions of allergy and asthma sufferers take refuge in the climate-controlled indoors. Yet the air-conditioning era has seen rates of allergies skyrocket in Western societies, and the prevalence of asthma has doubled with each decade that passes. The still-evolving ‘hygiene hypothesis’ says that the immune systems of allergy and asthma victims have been disoriented in part by insufficient childhood exposure to bacteria, fungi, nematodes, and/or other organisms. It appears, thanks largely to air-conditioning and electronic entertainment, that youngsters are not getting enough exposure to the more benign microscopic inhabitants of the outdoor environment, especially the rural environment.

“Meanwhile, extremely tight, well-insulated buildings often suffer from so-called sick building syndrome. It is estimated that a productivity loss of as much five to 13 percent is ‘built into’ well-buttoned-up, energy-efficient buildings, even when they adhere to international environmental standards.”

In summary: Global warming threatens to intensify tremendously and one of our principal methods of adapting to these higher temperatures – air conditioning – not only aggravates this warming, but actually inhibits our own bodies from adapting. Contrary to the Chamber of Commerce’s faith in humans mutating to adapt to rising temperatures, we are actually going in the opposite direction.