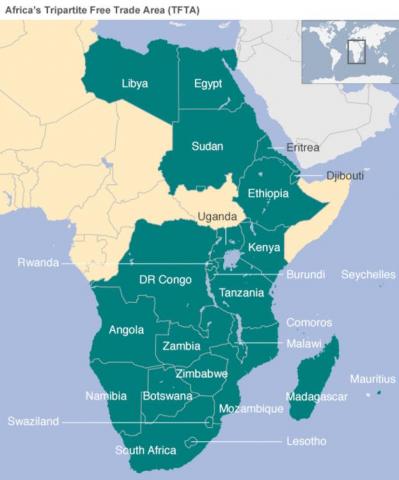 The following article appearts in the July-August 2015 NewsNotes.

Africa’s primary export is oil. For two decades, Africa’s oil has been in high demand, mainly due to the rapid urbanization and industrialization of China. Since the summer of 2014, however, oil prices have declined by 50 percent and the economies of the eight oil exporting nations of Africa have been hard hit. Nevertheless, according to the IMF’s April 2015 report "Regional Economic Outlook: Sub-Saharan Africa Navigating Headwinds," Africa’s economies are predicted to grow at about 4.5 percent during 2015.

Yet African economies face enormous uncertainties and risks. The large fiscal deficits that are a normal part of the budgets of sub-Saharan governments will become more difficult to finance. Borrowing money will become more expensive as the U.S. Federal Reserve is expected to raise interest rates making the dollar stronger against currencies like the Tanzanian and Ugandan shillings. To continue to promote national development, African nations will have to increase their debt and control their spending. In a recent budget debate in the Tanzanian Parliament, one member bemoaned the fact that the Tanzanian shilling (TSh) had depreciated in value from 1,700 TSh to one dollar at the beginning of 2015 to 2,100 TSh to one dollar in June 2015, a nearly 21 percent decline.

The spread of terrorist activities in some African countries has also had a negative impact on their economies. In the wake of travel warnings by western nations, 23 hotels have closed on the coast of Kenya and thousands of jobs have disappeared. Security concerns are not only driving away tourists in Kenya but are leading to increased defense expenditures, a trend that is taking place throughout Africa. Illicit financial flows are also exacerbating economic problems. Africa loses more than $50 billion every year as governments and multinational companies engage in fraudulent schemes to avoid tax payments, thus impeding development projects and denying poor people access to crucial services.

These negative trends of bloated military budgets and illicit financial flows are countered by the amazing efforts of the African Diaspora. Each year around $33 billion is remitted to sub-Saharan economies from Africans living abroad. According to African Business this was more than all of the aid from the Organization of Economic Cooperation and Development countries combined. Two thirds of this money flows through two transfer companies: Western Union and MoneyGram. On average these companies charge a 12 percent fee on transfers, about four percent more than the global average, which amounts to a $1.8 billion tax. Some African entrepreneurs are trying to break the stranglehold of these two companies with innovative services, such as WorldRemit, which make use of the ubiquitous cell phone technology and the use of mobile money transfers to expedite exchanges around the world.

What are African leaders doing to combat these negative economic headwinds caused by the decline in demand for commodities? One approach is through the formation of regional trade blocs. On June 10 in Johannesburg, South Africa, representatives from 26 African nations, with a combined GDP of $1 trillion, signed a new trade treaty called the Tripartite Free Trade Area (TFTA) which will be anchored on three pillars: traditional market integration, infrastructure development, and industrialization. This treaty will bring together three already existing economic communities – the Southern African Development Community, the East African Community, and the Common Market for Eastern and Southern Africa – and will create a free-trade zone that will eventually cover a region of more than 626 million people. Its goal is to ease the movement of goods across member countries, a challenging task given the poor infrastructure development in most of sub-Saharan Africa.

In the last 20 years the value of trade among members of TFTA grew from $3.2 to $36 billion. Africa’s intra-African trade is currently only about 11 percent of its total trade compared to 60 percent with Europe. Under TFTA these percentages should begin to change as Africa begins to build the continental common market that has been a dream for decades.