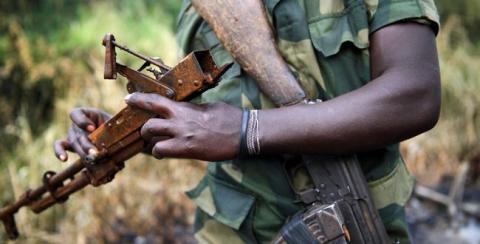 Two seemingly contradictory trends have emerged in the security situation of several African nations: an increase in military spending and a decline in civil warfare.

According to the Stockholm International Peace Research Institute (SIPRI) the total amount spent by African nations on military budgets increased 8.3 percent on average from 2012 to 2013, and by 81 percent between 2004-2013. Currently the total military spending for the continent is around $44.9 billion. Over two-thirds of the African countries for which data is available increased military spending in 2013. Arms merchants and a surprisingly large number of foreign nations have found a lucrative market for both old military hardware like Ukrainian tanks and new high-tech weapons like drones. Between 2006-2010 at least 28 different nations exported weapons to Africa including the usual arms suppliers like China, the U.S., Russia and Ukraine as well as newcomers like Singapore, Slovakia and the Philippines.

Yet, the incidences of large-scale political violence in Africa are thought to be declining in both frequency and intensity during 2000s. (Two theories about the decline include the cutback in funding for proxy wars after the end of the Cold War and the new opportunities for obtaining power and wealth that came with democratization.)

Compared to the 1990s, sub-Saharan Africa has seen about one third fewer wars. Up to the end of the 1990s many armed conflicts involved armies holding territory and fighting for control of the state, such as the liberation wars in southern Africa and the North-South war in Sudan. Today’s conflicts are small-scale (except for South Sudan) and often involve rebel or insurgent groups such as Seleka in the Central African Republic, the Lord’s Resistance Army (LRA) in Uganda, Al Shabaab in Somalia, and Boko Haram in northern Nigeria. These groups often move across borders and get funding from illegal and criminal trading activities or from banditry and through international terrorists networks.

Some of the reasons for increase military expenditure programs by some African countries, according to Dr. Sam Perlo-Freeman, director of SIPRI’s military expenditure program, are the response to genuine security needs arising from insurgent and rebel groups and the rise of piracy. But he also notes that economic growth, the dominance of autocratic regimes, and emerging regional arms races may also lead to increased expenditures on arms. Indeed, high prices for Africa’s commodities have led to increased revenues for several African nations, particularly those exporting oil. In its 2014 report, the African Development Bank group states that "after decades of relative stagnation, Africa has shown a steady upward improvement in performance in the past decade and a half. Average growth has been about five percent, while the value of intra-African trade has increased fourfold over the last decade to reach US$130 billion." Increasing military expenditures may also be due to the joint projects with outside armament manufactures like Antonov in Sudan and Eurocopter in Kenya.

As the security agenda has become a major challenge to statehood in Africa, the U.S. Department of Defense has taken a greater role in directing U.S. foreign policy. In a recent speech at West Point, President Obama promised to add another $5 billion to worldwide counterterrorism partnerships. No doubt some of this money will go to military support programs in Africa; in some places the U.S. outsources its security needs to local African armies.

While military spending is increasing and the number of wars is decreasing, most of the countries in Africa are actually at peace. However, African nations and continental organizations like the Africa Union are alarmed by the spread of insurgencies and violent non-state actors such as Al Shabaab, Seleka, M23, the White Army, anti-Balaka, Boko Haram, and the LRA. These groups cause conflicts that are typically smaller in scale and most often involve insurgencies of factionalized rebels on the peripheries of states rather than large armed forces. These conflicts also play out differently. They exhibit cross-border dimensions and depend on illicit trade, banditry, and international terrorist networks for funding and support.

These factionalized rebels, pirates and other violent groups are thought to be increasingly better armed and are developing the ability to disrupt and destroy order more quickly than states, even large ones like Nigeria, are able to defend their territory. However in most countries – not only in Africa but around the world – the insecurity of ordinary citizens stems not only from the activities of criminal groups but from the lack of sustainable development and inclusive and participative political systems. In 2015 the UN will attempt to address some of these underlying causes of the lack of human security and the role military expenditures play in fostering or deterring development through its work on the Sustainable Development Goals.

Photo: An M23 rebel holds the burned remains of an AK-47 rifle near the village of Mabenga in the DR Congo in July 2012. By Phil Moore (AFP/File)