Africa: Displacement on the rise 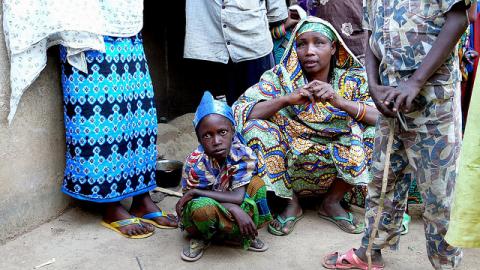 The death and displacement that occurs in the out-migration from Africa and the plight of internally displaced peoples across the continent were the subject of a recent hearing before the House Subcommittee on Africa, Global Health, Global Human Rights, and International Organizations. What emerged in the testimony of several governmental and NGO experts was a picture of tragic human suffering. THe following article was published in the November-December 2015 NewsNotes.

In July 2013, more than 300 Eritrean and Somali refugees drowned in the Mediterranean Sea off the island of Lampedusa. This tragedy awakened the world to the plight of African refugees and others seeking asylum in Europe. However, in the first six months of 2015, six times as many Africans asylum seekers have perished in the same sea.

In sub-Saharan Africa today the number of asylum seekers, internally displaced persons and refugees now exceeds 15 million. This is one-quarter of the 60 million people displaced worldwide – the largest number since World War II. More than half of all refugees are children. Those fleeing from conflicts in Somalia, the Central African Republic, South Sudan, Nigeria, the Democratic Republic of Congo, Mali, Burundi, Western Sahara and elsewhere now number 3.7 million. Sadly, the U.S. Refugee Admissions Program is resettling only 17- 19,000 refugees from Africa in FY 2015.

These unprecedented numbers have stretched the response capacities of local governments and international aid agencies to the breaking point.  The displaced people are vulnerable to economic hardships, human rights violations, without access to basic services, and often in physical danger from traffickers and xenophobic violence.

The causes of displacement are many but usually fall into two categories: threats to freedom and physical safety as a result of conflict or violence, and changes in climate or other environmental shocks. The Internal Displacement Monitoring Center estimates that in 2014 at least 4.5 million people in sub-Saharan Africa were newly displaced within their own countries; 769,700 people were displaced due to natural disasters. Many of the remaining millions were displaced as a result of societal and ethnic conflict. Armed non-state actors like Boko Haram and the Lord’s Resistance Army are examples of a new kind of conflict mechanism that is causing displacement especially in northeast Nigeria.

According to the UNHCR, often the average length of forced displacement can reach 17 years. Underlying many of the conflicts that are causing Africa’s displacement is the unstable relationship between societies and their states due to the lack of democracy and the flagrant abuse of human rights. Often weak states cannot hold back different ethnic and political differences, as in newly independent South Sudan.

The scope and manifold causes of displacement in sub-Saharan Africa present difficult challenges to host governments and humanitarian relief agencies. First, host governments bear the responsibility of protecting the most vulnerable by maintaining places of asylum and supporting and protecting both internally displaced peoples and refugees. Second, governments like the U.S. must continue to provide assistance through financial aid and improvements in humanitarian aid delivery. Third, all parties involved must ensure that the responses to the displaced are suited for protracted situations, such as aid for education and assistance to those not living in refugee camps. Fourth, powerful countries like the U.S. must continue to persuade host countries to include refugees and other displaced persons in national development plans.

Throughout Africa, governments and humanitarian organizations are seeking new and creative ways to deal with the crisis of displacement. In Nigeria, some humanitarian agencies are using mobile protection monitors and offering cash transfers and vouchers instead of direct distribution of food and other household items. In Niger, pastoralist refugees from Mali are given an extensive area where they can move with their animals. This “zone” model has been successful in promoting self-sufficiency and independence for refugees. In Tanzania and Zambia, some refugees are offered durable pathways to local integration through permanent residency and, in some cases, naturalization. The Democratic Republic of the Congo approved loans for longer-term projects benefiting displaced persons and hosting communities in their countries.