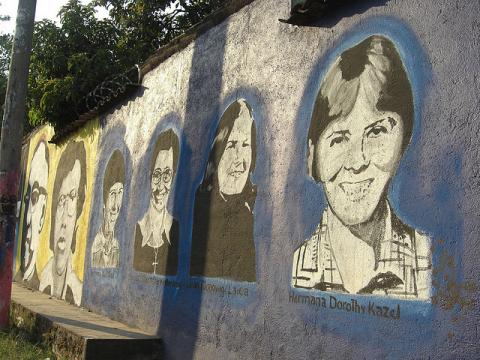 Maryknoll missioners reflect on the legacy of the four churchwomen in El Salvador in advance of the 40th anniversary of their martyrdom. This article was published in the November-December 2020 issue of NewsNotes.

December 2 will mark 40 years since the murders of the four U.S. churchwomen in El Salvador – Maryknoll Sisters Maura Clarke and Ita Ford, American lay missioner Jean Donovan of Cleveland, and Ursuline Sister Dorothy Kazel. For communities in El Salvador and in the United States, honoring this anniversary is an opportunity to reflect on the churchwomen’s legacy and to be reinspired by their witness of Christian solidarity.

The four churchwomen were brutally killed by Salvadoran government forces in 1980 for their ministry work among the poor, for which the U.S.-backed Salvadoran government had labeled them “activists.” Today among local Salvadoran communities and many U.S. Catholics they are viewed as martyrs, women who gave their lives as a witness to Christian love and solidarity.

In a September 2 interview with Catholic News Service, Bishop José Luis Escobar Alas of San Salvador said, “The [churchwomen] could have lived in better [economic] conditions in their native country than here, but, not only did they show solidarity with the poor, but also suffered the same fate as the poor…at the hands of a bloody repression.” He said that the local Church celebrates the anniversary of their death each year “because they lived out the Gospel of Jesus Christ to the most extreme of consequences.”

The Maryknoll Sisters have continued to honor the memory of the churchwomen on this anniversary throughout the years. For the 35th anniversary in 2015, in conjunction with the SHARE Foundation, they participated in a pilgrimage to the village in El Salvador where the churchwomen worked. This year, instead of a week-long anniversary gathering, which was cancelled due to the pandemic, the Maryknoll Sisters are now hosting a virtual gathering on the evening of December 2. The SHARE Foundation and LCWR had planned a delegation to El Salvador for this December, but they have shifted to offering virtual resources, including a toolkit for those wishing to plan events in honor of the four churchwomen.

In El Salvador today, Maryknoll Lay Missioners are reflecting on the ways in which the four Churchwomen’s memory and legacy live on in the community.

Lay Missioner Ann Grieg says Jean Donovan’s life inspired her to become a lay missioner herself. Peg Vamosy explains that many times when she introduces herself to Salvadorans, she is identified with the churchwomen, who are celebrated as martyrs along with St. Oscar Romero and Fr. Rutilio Grande.

Lay Missioner Melissa Altman says the churchwomen expanded the meaning of mission for the Salvadoran community in which she works: “[The terms mission and missionary] are common language here, as church-going people are encouraged to go on ‘mission’ to other parts of the country to evangelize for a weekend/week…[When I first arrived,] before I had time to explain [about my mission], Maria Julia, a long-time Church volunteer who…worked with Dorothy Kazel and Jean Donovan…said, ‘Oh no, Maryknoll is different. Maryknoll’s mission is to be in solidarity with us, to work with us and to learn together – that is how we build the Kingdom of God.’ My jaw dropped; I could not have explained it better.”

When he reflects on the impact of the four churchwomen, Lay Missioner Rick Dixon thinks of members of the community where he works in San Salvador. “Brandon, a five-year-old from La Esperanza, often asks me, ‘[When are the gringos coming?]’ He's referring to the Lay Missioners’ Friends Across Borders (FAB) program. With the COVID-19 situation, it has been a year since our last FAB group visited La Esperanza and Brandon. They gave him lots of tender loving attention and read lots of children's books to him.”

“I think of what Jean Donovan said about the children here: ‘I want to get closer to God and going to El Salvador is the only way I think I can... I don't know how the poor survive. People in our position really have to die unto ourselves and our wealth to gain the spirituality of the poor and the oppressed. I have a long way to go on that score. The poor can teach you so much with their patience and their wanting eyes. We are all so inadequate in our help. Several times I have decided to leave El Salvador. I almost could except for the children, the poor bruised victims of this insanity.’

Faith in action: For more information about plans to honor the 40th anniversary of the churchwomen’s deaths, visit http://bit.ly/40AnnChurchw