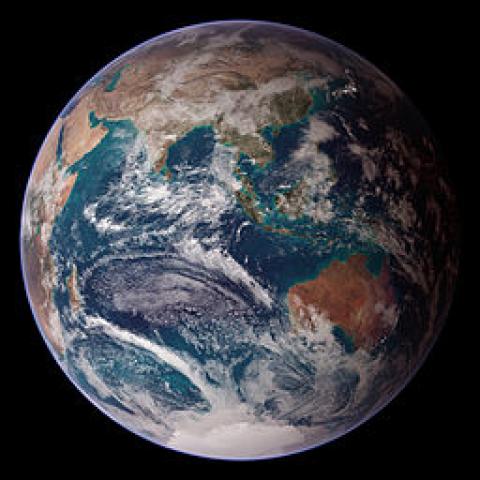 Several deadlines and anniversaries in 2020 make it a pivotal year in the fight against climate change, even as global attention is focused on the novel coronavirus pandemic.

In the United States, April 22, 2020, marks the 50th anniversary of Earth Day, a day first celebrated in 1970 when concern for modern industry’s impact on the environment motivated an estimated 20 million people to join demonstrations across the United States to call for a healthier planet. An impressive array of events to mark the birth of the environmental movement have been moved online due to the novel coronavirus pandemic. People are invited to gather virtually to celebate the Earth and reimagine a planet that is healthy and sustainable.

May 24, 2020, will be the fifth anniversary of the release of Laudato Si’, Pope Francis’s landmark encyclical on ecology that became an international phenomenon, giving moral and religious weight to the ecological crisis recognized by many Catholics and non-Catholics alike.

2020 will also be an important year for international action to address climate change. According to the Paris climate agreement, signed in 2015 by 195 countries, each nation must set and announce its first five-year goal for greenhouse gas emissions reduction, known as its “nationally determined contribution,” by 2020.

Then, every five years after 2023, each country must submit a report of its progress along with a new set of goals. There are no legal requirements to comply with the targets set forth by each country, as the agreement relies on international pressure and shared commitment to enforce its goal of limiting the average global temperature rise to a maximum of 2 degrees Celsius to avert the very worst effects of climate change.

Many countries have already announced their first set of goals, including the United States, which in 2016 released a goal of cutting emissions by 80 percent of 2005 levels by 2050. However, the Trump administration announced that the United States will leave the Paris agreement on November 4, 2020, just one day after the U.S. presidential election.

Although some nations have submitted targets, many have shown little progress in meeting their goals so far. A coalition of monitoring agencies released a “2020 Climate Change Performance Index,” which stated that “no country is yet on a path compatible with the Paris climate targets.”

Eyes are turned to the next UN climate conference, commonly known as COP26. The conference was originally scheduled to occur in Glasgow, Scotland, in November but has been postponed indefinitely due to the pandemic. “COVID-19 is the most urgent threat facing humanity today, but we cannot forget that climate change is the biggest threat facing humanity over the long term,” said Alok Sharma, President-Designate of COP26. “We will continue working tirelessly with our partners to deliver the ambition needed to tackle the climate crisis and I look forward to agreeing on a new date for the conference.”

Before the onset of the pandemic, several signs indicated the growing, global awareness from every sector of the need for climate action in 2020. In January, Blackrock, one of the world’s largest investment companies, announced its intention to shift its investment portfolio to help avert the threat of climate change. Greta Thunberg, a Swedish teenager and leader in the youth climate movement, was nominated for the Nobel Peace Prize and invited to speak at various world events, including the World Economic Forum in January 2020.

Although global attention is now focused on fighting COVID-19, Cristiana Figueres, the former executive secretary of the United Nations Framework Convention on Climate Change, argues that the pandemic could induce momentum for climate change action: “Some people used to think that they would be immune to global crises like climate change unfolding 'on the other side of the world,'" she wrote in Time Magazine. “I think that bubble has burst. No one is geographically immune to the coronavirus and the same is true for climate change.”

In 2020, Catholics around the world will continue to organize campaigns around ecological justice – for now, digitally. In the United States, the Catholic Climate Covenant has launched a year-long initiative to help Catholics make a “moral call for climate action” in 2020.

The campaign states, “Together, with and through our Church, we can move our nation toward climate solutions, for the sake of our common home and future.”

Read Pope Francis’s exhortation following the Synod on the Amazon, which highlights the importance of protecting the fragile ecosystems of the Amazon in 2020 and beyond: http://bit.ly/FrancisQueridaAmazonia

Check out the Catholic Climate Covenant, which helps U.S. Catholics respond to the Church’s teaching on creation: https://catholicclimatecovenant.org/