Urgent: Stop the killing of Palestinians 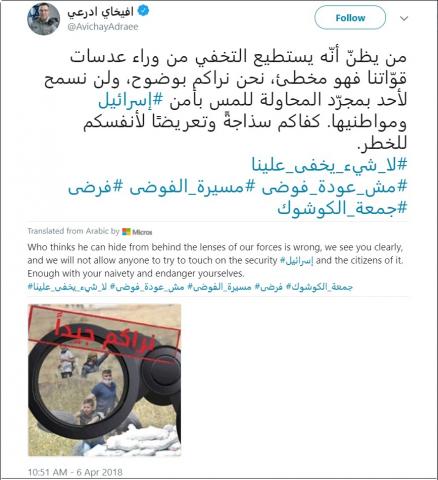 APRIL 6, 2018 – At least 18 Palestinians have been killed and hundreds injured by Israeli security forces confronting the peaceful and nonviolent “Great Return March” which started in Gaza on March 30, 2018. Send a letter to Congress urging immediate action to protect and aid the Palestinians and read statements by Churches for Middle East Peace and Pax Christi International.

TAKE ACTION: Tell Congress to Stop the Killing of Palestinians

From the Conference of Major Superiors of Men: Send a letter to your members of Congress urging them to "speak out against these killings, call for an independent investigation, for the re-instating of humanitarian aid to Palestinians, and for ending the occupation once and for all."

Image: Tweet by Israel's military spokesperson that contains an image of young unarmed Palestinian protesters through a scope labeled "We see you very well" on April 6, 2018.

"Churches for Middle East Peace (CMEP) denounces the violence, which resulted in 18 fatalities and more than 1,400  casualties, at least 750 of which were from live fire. We fully affirm the right of the Palestinian people to engage in nonviolent resistance.

"The participation of 30,000 Palestinians in demonstrations along the Gaza fence in observance of 'Land Day,' was a nonviolent act of political protest commemorating the death of six Palestinians during the general strike of 1976. The event’s endorsement by all major political parties in Gaza--including Hamas--does not delegitimize the peaceful actions of the demonstrators nor justify the classification of the protest area as a 'combat zone.' While the assembly of tens of thousands of civilians along the border fence and attempts of a few isolated individuals to breach the fence are legitimate causes for security concerns, resorting to live fire against unarmed demonstrators is a negligent and inexcusable response that failed to distinguish between those who came to protest peacefully and those with more malicious intentions."

"The 'Great Return March' of Palestinian citizens that started on 30 March 2018 is a peaceful and nonviolent action to draw attention to the forced expulsion and fleeing of Palestinians, known as the Nakba that started 70 years ago.

"Sadly, this year on Good Friday, whilst exercising that right to peaceful protest in Gaza, at least 15 Palestinians were killed and hundreds have been injured. Using snipers with live ammunition to disperse protestors and to shout at unarmed civilians is a violation of international law.

"Pax Christi International condemns the Israeli military’s use of excessive force and the shooting of unarmed Palestinian citizens and expresses deep sorrow at the loss of innocent Palestinian lives."

Read the full statement on the Pax Christi International website