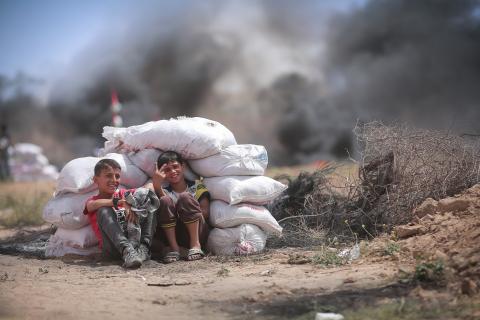 In recent years, international organizations have spoken out against the treatment of Palestinian children by the Israeli military, and particularly their use of military detention for children. U.S. Representative Betty McCollum has introduced legislation, H.R. 2407, that would promote Palestinian children’s rights and prohibit U.S. taxpayer funding for military aid to Israel that contributes to their ill-treatment.

Take Action: Urge your representative to support this legislation today.

Israel is the largest recipient of U.S. foreign assistance, with almost all of that assistance going toward military aid. UNICEF and other international organizations have documented the widespread abuse of Palestinian children at the hands of the Israeli military – including the use of interrogation, psychological and physical abuse, and denial of due process rights while in detention. Now, Rep. McCollum and leaders of many faith-based organizations are calling for an end to U.S. taxpayer funding for aid that contributes to the ill-treatment of Palestinian children.

Urge your representative to co-sponsor this legislation today.

In addition, read a statement from Churches for Middle East Peace (of which Maryknoll Office for Global Concerns is a member) on the recent decision by the U.S. to reverse its position on Israeli settlements in the occupied West Bank.

Photo by hosny_salah of children in Gaza, Palestine from Pixabay.