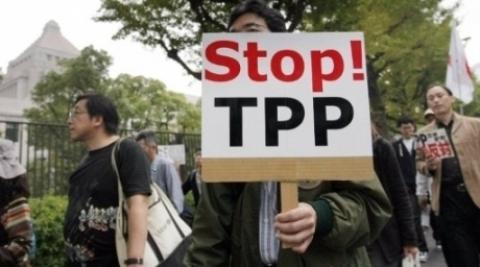 The following petition is circulated by Public Citizen.

Some in Washington are preparing to steamroll Congress and revive an arcane procedure Richard Nixon cooked up to grab Congress’ trade authority and hand it over to unaccountable trade negotiators who want to push the Trans-Pacific Partnership (TPP) through.

Fast Track trade authority is the way that the public and Congress got steamrollered by trade agreements like NAFTA and the WTO. In fact, since Nixon cooked it up, this procedure has only ever been used 16 times among over 500 trade agreements. Good trade agreements don’t need to be Fast Tracked. Only the most damaging ones require this extreme procedure — the deals that left millions of families slammed by job offshoring, floods of imported tainted meat, and rising medicine prices.

Now, as public and congressional opposition to TPP is growing daily, a pack of large corporations and TPP’s boosters in Congress want to revive this arcane procedure. They know Fast Track is the only way to force the TPP into effect.

The good news is that Congress would have to agree to delegate away its authority. Fast Track cannot just pop into existence on its own. So, we need to ensure that Congress retains its control of the process to avoid further trade-agreement damage to us.

We believe in the checks and balances our Founders created in the U.S. Constitution: Congress has the authority to write our laws and set the terms of our trade agreements, while the executive branch implements those laws and negotiates with foreign countries to implement Congress’ trade policy. Fast Track Trade Authority would grab those powers from Congress, destroying Congress’ ability to safeguard the U.S. public from damaging trade agreements.

We demand that Congress reject any attempt to revive Fast Track Trade Authority. We call on Congress to retain its constitutional authority over our trade agenda. It is totally unacceptable that unaccountable trade negotiators would be empowered to unilaterally determine the contents of U.S. trade agreements, or that agreements could be signed and entered into before Congress votes on them. But, that is exactly what Fast Track would authorize.

Previous trade agreements negotiated and implemented under Fast Track have led to widespread damage: millions of U.S. jobs offshored, floods of unsafe imported food and products that do not meet our safety standards, and attacks on our domestic environmental and consumer protection laws in foreign tribunals.

At stake is Congress’ constitutional authority to represent our interests. We sent our members of Congress to Washington to stand up for us, not to give away their authority to do so.

We stand united calling for Congress to reject any attempt to establish Fast Track Trade Authority.