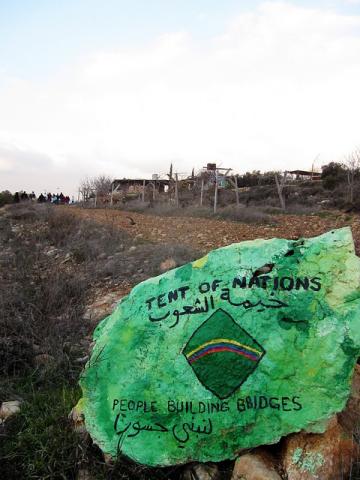 Tent of Nations, a peace project located on the 100-acre Nassar family farm near Bethlehem, came under attack on May 19 by the Israeli military. Between 1,500 and 2,000 mature, fruit-bearing apricot and apple trees and grape vines were destroyed along with terraced land, according to a report by Friends of Tent of Nations North America (FOTONNA).

Tent of Nations operates by the motto, “We Refuse to Be Enemies,” hosting international visitors and volunteers, offering activities for local youth, and running educational projects for women in a nearby village.

The Nassar family has papers showing purchase of the land by Daher Nassar in 1916, and they have been working through Israeli military and civil courts for over 20 years to re-register the land in their name. FOTONNA reports, “In late April, the Israeli military authorities placed a warning on the land declaring that the trees were planted on ‘State Land’ and should be ‘evacuated.’” FOTONNA notes that an appeal was filed on May 5, yet while the legal process was still underway, the described destruction took place on May 19 without warning.

The situation of the Nassar family is but one of countless examples of Palestinians who live under the threat of land confiscation or whose land has already been taken by the Israeli government. B’Tselem, an Israeli human rights organization, reports on the process by which Israel takes control of Palestinian land, explaining, “The principal tool used to take control of land is to declare it ‘state land.’... Other methods employed by Israel to take control of land include seizure for military needs, declaration of land as ‘abandoned assets,’ and the expropriation of land for public needs.”

Israeli confiscation of occupied Palestinian land serves the illegal settlement enterprise in the West Bank. As B’Tselem explains, “Despite the diverse methods used to take control of land, all the parties involved - the Israeli government, the settlers, and the Palestinians - have always perceived these methods as part of a mechanism intended to serve a single purpose: the establishment of civilian settlements in the territories … Moreover, since this purpose is prohibited under international law, the methods used to secure it are also unlawful."

The Nassars’ 22-year struggle must come to an end along with all illegal confiscation of Palestinian land by the Israeli government. Contact your elected official today to bring this urgent matter to their attention.

The illegal and unjust confiscation and destruction of property will not serve the interests of peace nor ensure security for Israelis or Palestinians.

For further action: In addition to writing to members of Congress, you can take action by signing the FOTONNA petition which will be sent to a number of U.S. and Israeli officials.

Photo by Jordan and Marisa Magnuson