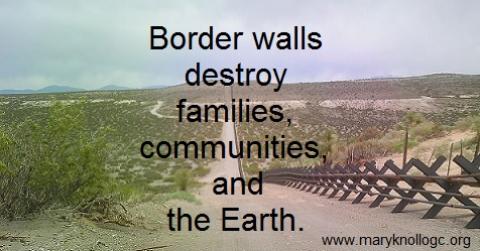 On February 15, 2019, President Trump declared a national state of emergency. The day before, Congress passed a funding bill that includes an increase in immigrant detention and $1.375 billion for wall construction. The Maryknoll Office for Global Concerns (MOGC) condemned both the emergency declaration and the legislation.

“What is the just and humane way to secure our borders and treat those fleeing persecution? It is not with more immigrant detention and a border wall,” said Susan Gunn, Interim Director of the Maryknoll Office for Global Concerns.

Click HERE to send a message to President Trump. Tell the president to reverse his state of emergency declaration on the southern border and work with Congress to reduce immigration detention and protect the human rights of vulnerable people asking the United States for refuge.