Tell Congress to vote 'No' on TPP 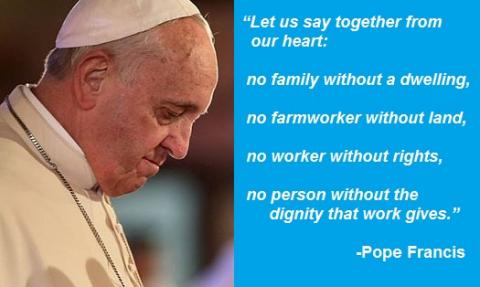 On February 3, trade ministers from 12 countries met in New Zealand to sign the Trans Pacific Partnership (TPP) trade agreement – a deal that could affect the lives of over 800 million people and more than 40 percent of the world’s economy.

We have seen trade deals like this before – NAFTA and CAFTA – and we know the poverty, pollution, and suffering they can bring to poor communities.

Now that the deal is signed, Congress has to approve it. The Obama administration will use “fast track” authority to give Congress 90 days to approve it with an up-or-down vote. The deal was negotiated in secret and now Congress will decide if they approve.

Join us in opposing the TPP – send a message to Congress now.

Trade can be beneficial provided that agreements are structured to help reduce, not exacerbate, inequality or injustice.

This trade deal will put the rights of investors over the rights of people, allowing corporations to sue governments when they protect public interests and the common good with environmental and public health laws. On top of that, the TPP will limit access to affordable medicines, suppress the little wages small farmers earn, and allow for toothless protections for the environment and workers.

Ask Congress to work for just trade and oppose the TPP.