Take action for a world free of nuclear weapons 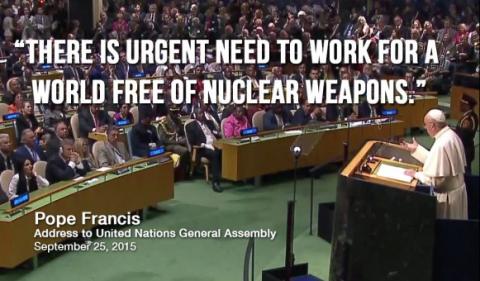 More than 50 world leaders are in Washington, D.C. this week (March 30-April 1) to attend the 2016 Nuclear Security Summit. They plan to discuss ways to prevent an act of nuclear terrorism rather than what the world really needs –nuclear disarmament.Click here to urge President Obama to follow through on the commitment he made at the beginning of his administration, "to seek the peace and security of a world without nuclear weapons."There is no such thing as nuclear security when 15,000 nuclear weapons still exist in the world. In the United States, nuclear weapons spending is at an all-time high, and includes a 30-year program to "modernize" the U.S. nuclear arsenal and production facilities.“There is urgent need to work for a world free of nuclear weapons, in full application of the non-proliferation treaty, in letter and spirit, with the goal of a complete prohibition of these weapons.”– Pope Francis, speech to the U.N. General Assembly, September 25, 2015Take action today