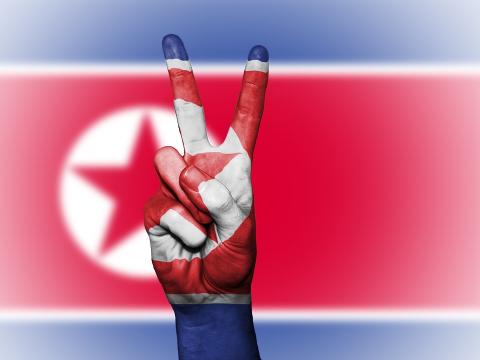 There is a new, real opportunity for peace on the Korean peninsula. North Korea has invited the United States to enter into talks on the urgent issues of denuclearization and normalization of relations. This is the moment we have been waiting for.

After the two Koreas walked together at the Opening Ceremony of the Winter Olympic Games in PyeongChang in February, North Korea formally invited leaders from South Korea to visit Pyongyang. That visit happened March 5 and 6 with amazing results.

Once again, we see that dialogue works.

Read about the work of Father Gerald Hammond, a Maryknoll missioner on the Korean peninsula who regularly visits North Korea to provide life-saving medicine for TB patients. Father Hammond demonstrates with his life that a culture of encounter and dialogue is the way to dispel fear and build peaceful relationships.

The South Korean special envoy detailed the exciting results of the two-day meeting with North Korean officials in Pyongyang (Translation by News Agency Zoom in Korea):

1. SUMMIT: The North and South agreed to hold the third North-South summit at the end of April.

2. HOTLINE: The North and South agreed to establish a hotline between the leaders of both sides to ease military tension and for close consultation.

3. DENUKE: The North clearly stated that if military threats against the North are resolved and the security of its system is guaranteed, it has no reason to possess nuclear weapons.

4. TALKS: The North expressed readiness to have candid talks with the United States to discuss the issues of denuclearization and normalization of US-DPRK relations

5. STANDDOWN: The North made clear that as long as talks continue, it will not resume nuclear or ballistic missile tests. The North also confirmed that it will not use its nuclear or conventional weapons against the South.

6. DIPLOMACY: The North invited the South to send a taekwondo demonstration team and an artists delegation to Pyongyang.

This is a major break-through in the tense relationship between the United States and North Korea. It is now up to the United States to seize this opportunity for peace and enter into dialogue with North Korea. News agencies are reporting that the South Korean envoy who returned from North Korea on March 6 is scheduled to come to Washington, D.C. this week to brief the Trump administration on the discussions with North Korea. This is our moment to call for dialogue, diplomacy, and peace. Eleven million lives on the Korean peninsula depend on it.

The time for dialogue is now!

Image: The flag of North Korea and peace sign via Pixabay.