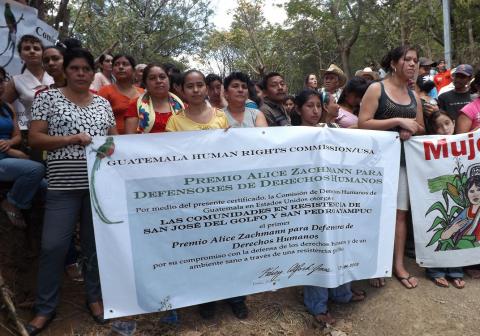 The following alert is circulated by the Guatemala Human Rights Commission (GHRC):

As you read this, the communities in resistance to mining in San Jose del Golfo and San Pedro Ayampuc are holding their ground at the roadblock they have maintained since March of this year as they are threatened by a large group of pro-mining provocateurs.

Please contact the U.S. Embassy in Guatemala and the U.S. mining company to demand that they ensure the safety of these brave men and women.

At around 10 am [Tuesday, Nov. 13], approximately 80 people from San Jose del Golfo and surrounding municipalities wearing hats and shirts from EXMINGUA, the subsidiary of the U.S. company Kappes, Cassiday & Associates, tried to open access to the mine. They were unarmed, but many acted very threateningly towards those at the roadblock. Rumors circulated that the company offered money to near-by residents to participate.

As news spread about the confrontation, the number of those in peaceful resistance to the mine grew to an estimated 500 people. About 16 members of the National Civil Police were also on the scene, but held their distance. Attempts at dialogue facilitated by representatives of Presidential Commission for Human Rights (COPREDEH) and the Human Rights Ombudsman (PDH) as well as national and international organizations failed.

Despite threats and intimidation by the mine supporters, women, children and the elderly formed the front line of defense and held up banners demonstrating international solidarity almost as shields against the angry mob in front of them.

As the day drew to a close, nonviolent resistance won out, and the pro-mining group retreated.

However, [on Wednesday, Nov. 14], an even larger group arrived, once again threatening the communities in resistance. Our contacts in San Jose del Golfo have reported that they have called the police to ensure the safety of all involved, but they haven't arrived. We're extremely concerned for the safety of these nonviolent protesters.

Contact the U.S. Embassy and the company now. Urge them to prevent violence against peaceful protesters.